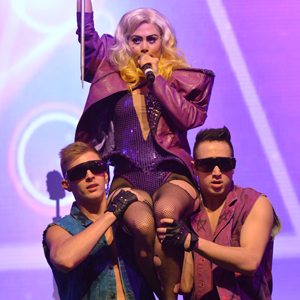 Folklaw can’t decide who headlined the in-house industry event of the year: mining magnate Clive Palmer and his life-size tyrannosaurus rex, or the Lady Gaga impersonator who gave a heroic performance to a roomful of lawyers.

Folklaw can’t decide who headlined the in-house industry event of the year: mining magnate Clive Palmer and his life-size tyrannosaurus rex, or the Lady Gaga impersonator who gave a heroic performance to a roomful of lawyers.

Arriving at the Palmer Coolum Resort on the Sunshine Coast, which hosted the 2012 ACLA National Conference and Awards, can be unsettling if you’re accustomed to the understated elegance of most five-star resorts. Everything here is larger-than-life, including the owner, who seems to have run out of sensible ways to spend his billions.

Folklaw arrived there on Thursday (8 November) in time to witness the bizarre spectacle of an eight-metre tall mechanical dinosaur being assembled on the manicured lawns of the resort’s golf course, which, incidentally, hosts the Australian PGA Championship.

But, upon entering the hotel lobby, the dinosaur starts to make sense.

The lobby is filled with vintage cars and photos and caricatures of Palmer on almost every wall. It leads to a balcony overlooking the golf course, where you can stare directly into the eyes of the pre-historic mechanical monstrosity while enjoying your meal from the Palmer Grill.

A source at Palmer Coolum Resort, which was purchased by the billionaire in 2011, told Lawyers Weekly that Palmer plans to litter dozens of dinosaurs throughout the resort, creating a Jurassic Park-type experience. The prehistoric creatures will be brought to life with a swaying tail, full head movements and a guttural roar.

As Folklaw recalls, resurrecting these giant carnivores didn’t go so well in the movie...

And, as it turns out, the T-rex wasn’t the only monster at the resort.

The surprise entertainment at the ACLA Awards event that night was a tribute show by a convincing Lady Gaga impersonator and her “monster” dancers (pictured). It was a tough gig for the entertainer, whose audience is usually made up of teenage girls. But by the time The House of GaGa performed its rendition of Bad Romance, a reasonably large group of normally buttoned-up in-house lawyers were on their feet busting their best dance moves.

The evening at which Adelaide and Bendigo Bank’s legal head Maria Polczynski picked up the coveted 2012 Australian Corporate Lawyer of the Year Award also saw a number of attendees pulled up on stage for an impromptu singing competition of Gaga classic Poker Face.

Folklaw also tried to put on its best poker face when Gaga asked the roomful of in-house lawyers to curl their fingers in a claw and growl like a monster...