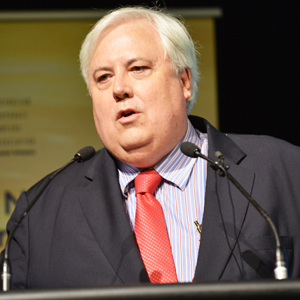 Clive Palmer is a maverick. He is a man who speaks his mind, something for which he is often lampooned. He has built an empire on sharp business knowledge, underpinned by the firm belief that there is always a solution for a need.

When ACLA asked Palmer (pictured) to speak at our 2012 National Conference, we knew he would be a controversial figure, with some in the community strongly opposed to his views and others taking the media sound-bites as a representation of the whole man.

However, it was not his political views that got him on the program. This businessman has always had in-house counsel, and had them in the inner circle of his businesses.

I have to confess that, while we had asked Palmer to speak on a particular topic, we really didn’t know exactly what he would say.

This concept is not new. However, to hear a successful businessman saying that his success is due, in part, to in-house lawyers being close to the business and finding solutions to the needs of the business, is something all CEOs should embrace.

One of Palmer’s key messages was that, regardless of who you work for or what your role is, in-house counsel are best placed to apply their legal knowledge to solve problems or capitalise on opportunities.

Palmer also outlined key criteria he expects from his in-house crew, which includes taking a long-term view of both the commercial and legal aspects of business. And, surprisingly for such a strong-willed and controversial man, he admitted he does what his in-house counsel say, especially on directors’ obligations.

His message to businesses across Australia was also clear: in-house lawyers are a necessary element of a business team and far more cost effective than engaging private practice lawyers. On the latter he offered some advice: he suggested that private practice stop focusing on the fee.

To the in-house lawyers in attendance, Palmer advised them to focus on the problem or opportunity and provide solutions. To look at what can be done, not what has been done, and take a long-term perspective to protect the business.

Whether you like his tactics or not, it is clear Palmer uses the law to his advantage. Like discovering that the maker of the film Titanic only registered the trademark in the category covering movies, enabling Palmer to undertake a project many of us mock – building the Titanic II.

Like most, I thought the Titanic II was a crazy idea. But hearing Palmer tell us that he had appointed his senior in-house counsel as the project director for Titanic II, and his reasons for this decision, provided great insights not covered in the various media reports.

He chose his in-house counsel because the endeavour is complex, with multiple relationships all needing to be brought together on time and on budget. These relationships will be underpinned by contracts, familiar terrain for a lawyer who knows the business, possesses negotiation skills and has the patience to persist.

Throughout his speech and during the Q&A, Palmer praised the virtues of in-house counsel. He even went so far as to say in-house counsel is a better and cheaper option than private practice law firms – and that they don’t get paid enough. The audience agreed.

Palmer received a loud and sustained applause at the end of his session. But it wasn’t just for his praise of those working in-house. During the Q&A he revealed more about himself. When he lost his first wife to cancer and had to raise his 10-year-old daughter alone, he wasn't sure he could go on, but at this dark point he realised you have to pick yourself up, know yourself and, more importantly, know what really matters: your integrity and your family.

This opinion piece is not intended to sway people’s views on Palmer. He will continue to spark controversy, but his message to business is astute: be smart and use in-house counsel.

His message to in-house counsel is equally to the point: look for the solutions to the need and take a long-term view.

Finally, to the high-performing professions, Palmer advises:  know yourself and what is important to you.