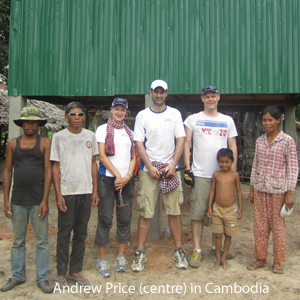 On 11 November, a team of six from Wotton + Kearney headed to Phnom Penh, Cambodia to build 12 houses for poor Cambodian families.

They travelled there with the Tabitha Foundation, a non-profit organisation that seeks to help suffering families in Cambodia.

The journey to Cambodia started in January 2012, when a few of us from W+K started talking about the possibility of undertaking this project.

The fundraising effort started in May 2012 when five from the firm (three of whom went to Cambodia) took part in the Sydney Morning Herald Half Marathon and raised approximately $9000. A dinner, auction and raffle on 31 May at Manta Restaurant in Sydney, attended by more than 50 people, also raised more than $9000, while a fundraising event at the MARS Gallery in Melbourne raised $3000.

We ultimately raised a total of $21,789 for the Tabitha Foundation. These funds bought the materials to build the 12 houses.

The first day in Cambodia involved an orientation and included a compulsory visit to Tuol Sleng Genocide Museum and The Killing Fields.

One of the key aspects of the induction is to ensure that everyone involved knows about the recent history of Cambodia and the atrocities suffered by the Cambodian people at the hands of the Pol Pot regime. It is difficult to describe the impact of visiting these places and meeting Cambodian people who lived through and experienced such horror and loss.  It is estimated that between one and three million Cambodians died at the hands of the Khmer Rouge.

House building commenced the following day in the Kompong Chhnang region, which was a two hour minibus ride from Phnom Penh.

When we arrived we were greeted by the entire village – men, women and children.

We worked alongside Cambodian builders and villagers to build the houses. It is definitely not easy work, particularly in the high 30 degree heat and humidity. The foundations of the house and roof had been put together before our arrival so our job was to put in the floors and put the walls up. Whilst we were able to work quite independently when we were nailing the floor boards, putting up the walls was a real team effort.

We completed the houses in two solid days of building. At the end of the second day there was a formal handover ceremony where we presented the villagers with a blanket from Tabitha as a house-warming gift.

It is extremely rewarding on a personal level to have completed the house-building project.  The community was genuinely so grateful for the contribution that our team had made.

One of the experiences widely shared amongst the team was the significance of the fund-raising effort throughout the year. It is extremely rewarding to see where the money raised would ultimately end up and see the reality of the lives that it would change.

CSR and pro bono programmes can be incredibly important for law firms for a variety of reasons.  These include, for example:

1                 Increasing the firm's appeal for graduates and other potential staff. In a recent survey, more than 50 per cent of people said the firm’s pro bono practice was a factor in their decision to work at the firm.

2                 Satisfied staff. A formal pro bono and CSR programme provides immense personal satisfaction to staff by allowing them to make a difference to those less fortunate.

3                 Attraction to clients – many client organisations want to work with law firms that take an active approach to community issues.

4                 Demonstrating values. A formal pro bono and CSR programme enhances the firm’s reputation among the community and clients. The support we received leading up to the trip internally from staff, clients, third-party service providers, and friends and family was overwhelming.

6                 Education - through this project we have been able to deliver a level of education about the excellent work that the Tabitha Foundation undertakes and also an awareness of the difficult situation that still currently exists in Cambodia. We have also been able to share a good story about our firm.

A law firm doesn’t need a significant pro bono budget to undertake CSR or pro bono work.  There are many pro bono initiatives, including undertaking work for the Public Interest Law Clearing House (PILCH) or community legal centres that require contribution via a lawyer’s time.

On the CSR front there are numerous ways firms can get involved, including supporting many national fundraising activities, for example W+K supports R U OK? Day and Cancer Council’s Biggest Morning Tea.

From a management perspective, there are significant benefits to having a formal pro bono and CSR programme both internally and externally. The benefits will soon be seen by not only those who have been helped by the programme but also internally within the firm.

Andrew Price is the chief operating officer at Wotton + Kearney.