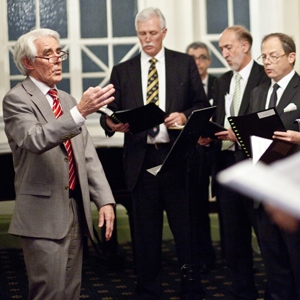 About as frequent as a sighting of Halley’s Comet, every so often Folklaw is unchained from the typewriter, dressed in a presentable manner, and dispatched on assignment to gather news from the field.

About as frequent as a sighting of Halley’s Comet, every so often Folklaw is unchained from the typewriter, dressed in a presentable manner, and dispatched on assignment to gather news from the field.

Recently, one such irregular occurrence, eh, occurred, when Folklaw was invited to attend the City of Sydney Law Society’s annual dinner, which included a special performance by the NSW Bar Choir.

An evening away from the usual cold mushy pea soup? Hurrah! The season for goodwill must indeed be upon us!

Established in 1995, The Bar Choir is the brainchild of Justice Peter Hidden (pictured left), who has directed it since it started. The choir is comprised of a crew of around 30 members, including judges, barristers, solicitors, and others with connections to the legal profession.

“We have a mixed group, some with plenty of experience and others with very little, but those with little seem to learn very fast,” Hidden told Folklaw.

“Each night we perform, I wonder beforehand if it’s all going to come together in time, but it always does,” he added.

Hidden, one of two Supreme Court judges in the choir, said he was at first “sceptical” about the idea of forming a choir group, but went ahead and advertised it in the Bar News nonetheless, and was surprised to find people willing to take part in practice, many of whom still perform with the choir today.

The choir’s regular gig is usually at either judge or lawyer conference dinners, when attendees are “letting their hair down”. They practice every Tuesday to, as Hidden puts it, “try to grow its repertoire”.

Its repertoire is extensive, ranging from classical to contemporary to Christmas carols.

At the City of Sydney Law Society dinner, the choir performed three songs, including a charming rendition of bush ballad Waltzing Matilda and an amusing arrangement of Cole Porter’s Let’s Do It.

“We performed at a mediation conference a few months ago and one of our members, Vicki Hartstein, rearranged the lyrics from the Cole Porter song to suit the crowd,” explained Hidden. “So the famous line Let's Do It (Let's Fall in Love) became Let’s Do It (Let’s Mediate!).

The Bar Choir has no gigs this side of the New Year but is currently rehearsing for the opening of law term ceremonies at St James’ Church in late January.