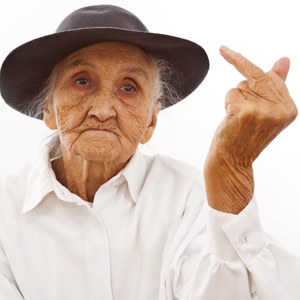 Judges are accustomed to occasionally hearing abusive language in the court, although Folklaw doubts they are used to hearing it from the mouth of an 89-year-old woman...

Judges are accustomed to occasionally hearing abusive language in the court, although Folklaw doubts they are used to hearing it from the mouth of an 89-year-old woman...

But that was the treat enjoyed by Judge Mary Faherty in an Irish courtroom last week.

Mother-of-nine, 89-year-old Nora Gildea, who is suing her daughter for ownership of two fields and a cottage in Donegal in northwest Ireland, told her daughter Nora Kelly’s barrister she didn’t want to “f*cking hear about her”, the Irish Independent reported.

“I don't want to f*cking hear her name,” she added, when questioned about the fall-out with her daughter.

And Folklaw is always hearing about how young people have no manners...

The court case sounds like the plot of film The Field, with a number of family members suing each other over land.

Kelly is counter-suing her mother to establish her rights to the property, which was left to her by her uncle, William John Kennedy, in his will in 2007, the Irish Independent reported. Her brother Dan Gildea is taking a separate case against Kelly, claiming ownership of a shed, while another brother, Chris Gildea, is claiming rights to all the lands left to Kelly, including the plots claimed by his mother.

Ah family, where would we be without them?

Nora Gildea insisted that her brother William had “no right” to leave the land in his will as it belonged to her late great-uncle.

After her foul-mouthed tirade, when asked again about why she was taking the case against her daughter, she responded: “Sure it passes the day, I’m here for the craic,” the newspaper reported.

Folklaw could think of better ways to pass the day!

The case has concluded; judgment has been reserved and is expected to be handed down next month.