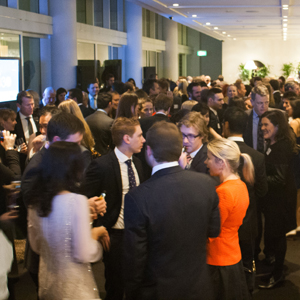 The earnings gap between young journalists and young lawyers was in evidence at the Lawyers Weekly 30 Under 30 Awards on Friday (14 June).

The earnings gap between young journalists and young lawyers was in evidence at the Lawyers Weekly 30 Under 30 Awards on Friday (14 June).

While a number of the young lawyers abandoned the Awards ceremony before the free booze ran out, no doubt to head to Ryan’s Bar or Establishment, just over the road from the Awards’ venue at the Ivy Sunroom, Folklaw and colleagues were propping up the bar to the bitter end – supplementing our meagre salaries with as much free booze as we could imbibe...

We also managed to get away without paying for dinner that night – with the delicious samosas and mini burgers and chips being a hit with lawyers and non-lawyers alike!

The night was a roaring success, with the young lawyers proving to be an enthusiastic and noisy crowd...

Folklaw reckons there was a bit of competitive cheering going on, with the Herbert Smith Freehills crowd nearly lifting the roof, especially when Sydney lawyer Shona Seaton was presented with the M&A Award.

“I think my friends were just trying to embarrass me,” Seaton said when discussing the raucous cheering with Folklaw at the ceremony.

Seaton was the only M&A category winner able to attend the Awards; no doubt the other two winners – Corrs Chambers Westgarth’s James Nicholls and Norton Rose Fulbright’s Andrew Fisken – were chained to a desk somewhere, feverishly trying to complete some deal or other.

HSF had some competition in the noise department from Minter Ellison and Norton Rose Fulbright.

The Minters crew nearly took the house down when Monique Cowden picked up a Dispute Resolution Award, while the supporters of Nicola Cosgrove, a winner for Norton Rose Fulbright in the Banking & Finance category, were described as a “noisy bunch” by a Lawyers Weekly staffer who was sipping champagne near them.

“A number of members of my team came to support me,” Cosgrove revealed to Folklaw later at the Awards. “It was great.”

And that is exactly how Folklaw would describe the Awards – a great night had by all!