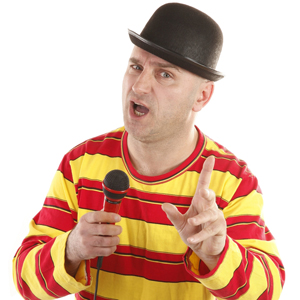 Folklaw can’t begin to fathom why a US lawyer thought it would be a good idea to tell a knock-knock joke at a murder trial.

Folklaw can’t begin to fathom why a US lawyer thought it would be a good idea to tell a knock-knock joke at a murder trial.

In a case of ‘what the hell was he thinking?’, Don West, the Florida lawyer representing accused killer George Zimmerman, told the following gag on the opening day of the trial (25 June).

“Knock-knock. Who’s there? George Zimmerman. George Zimmerman who? All right. Good. You're on the jury,” he said, the joke falling like a lead balloon before the stone-faced jurors.

Maybe they were laughing on the inside...

Now, in fairness to West, it may not have even occurred to him that the joke was inappropriate.

But, after watching a video of the proceedings on YouTube, Folklaw discovered that West gave a lengthy disclaimer before launching into his routine. He warned jurors that they might not think it was funny under the circumstances. He even asked forgiveness in case they found the joke inappropriate.

If you know a joke could be taken the wrong way and, importantly, is not that funny, then why tell it?

The only explanation Folklaw can muster is that West was desperate for comic relief from his all-too-serious job of representing alleged criminals.

But if you’re going to tell a joke, Folklaw urges lawyers to at least get it right.

Learn comedic rules before you break them. Knock-knock jokes are meant to make a pun, and West’s gag was not punny at all.