You can bet fun was had at Awards 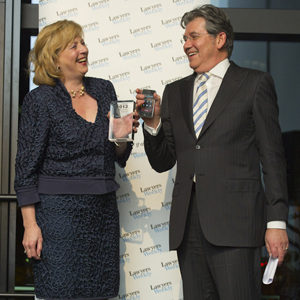 Tom Waterhouse, Lance Armstrong and Sex and the City were among the subjects raised in the course of the speeches at the 2013 Lawyers Weekly Australian Law Awards held at Crown Casino in Melbourne on Friday night (26 July).

Tom Waterhouse, Lance Armstrong and Sex and the City were among the subjects raised in the course of the speeches at the 2013 Lawyers Weekly Australian Law Awards at Crown Casino in Melbourne on Friday night (26 July).

Australian comedian and the evening’s MC, Rob Carlton, reckoned Tom Waterhouse might show up at half-time to give odds on the remaining Awards finalists, but no such appearance transpired.

Fiona Ruggieri from Burgess Paluch, who presented the Pro Bono Award to Brooke Massender from Herbert Smith Freehills, revealed that she was last at Crown at a women in business event where handbags, Sex and the City and rabbits were among the topics of conversation...

The Crown provided great service and excellent food (Folklaw loves food) and even a free show – with the Southbank Gas Brigades shooting their nightly fireballs into the air directly outside the window of the room where the Awards were being held.

One of the highlights of the night was Fiona McLeod being awarded the Advocate Award – and making an appearance via iPhone. The eminent silk was unable to attend the Awards because she was in the Northern Territory, but she did send a video acceptance speech and was able to hear the reaction to her win when her great friend Caroline Kirton SC (pictured with executive director of List A Barristers David Andrews and iPhone) called her as she accepted the Award on McLeod’s behalf.

One of Folklaw’s other favourite winners was the Transaction Team Award winners from Gilbert + Tobin, who were delighted to win but were somewhat shy about appearing in front of the camera for an interview with Folklaw’s colleague Stephanie Quine.

There were some impressive outfits on display, with fashion-forward Awards judge and Negocio Resolutions head Steve Lancken eschewing a tie in favour of a fetching orange scarf.

Many of the speeches on the night were most impressive, with Partner Award winner Martijn Wilder worthy of a special mention for having the good sense to thank his wife, but Folklaw would have to give line of the night, not to a lawyer, but to the boyfriend of one of the finalists sitting at our table who said he reckoned there should be a ‘partner award’ for lawyers’ other halves...

Folklaw reckons he could have a point; maybe next year!

You can bet fun was had at Awards