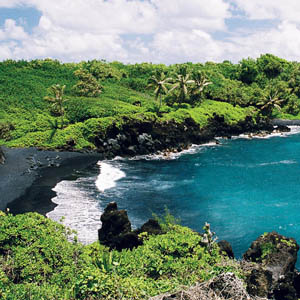 Black, red and green are the tones of the world's most uniquely coloured beaches. Here are the best of Hawaii's tinted shores

Take me there: If Mars did beaches, they would look like this russet stunner. A rich blend of colours is found here as blue ocean meets red sand and black lava rocks. The planetary theme continues with barbed rocks that block waves from reaching the shore. This beach is hidden in a small cove on the eastern side of Maui off the Hana Highway, which is a terrific road trip in its own right.

Why the hue: A volcanic cinder cone hill named Ka'uiki Head on the northern end of the bay is responsible for this spectacular beach. The red colour in the crescent-shaped shore comes from iron-rich crumbles. Black lava chips lie among the red sand and look like someone has scattered instant coffee granules along the beach.

What to do: The beach is secluded so be prepared for some bathing in the buff. It's also a bit of a hike down to the red sand shore and it's certainly not flip flop terrain so be sure to bring some serious shoes. After all that exertion, the natural swimming pool fenced by sharp rocks is a great way to cool down - and it's up to you whether you take the plunge in your togs or not.

Take me there: Glassy jet-black sand is like eyeliner to this beach and it serves to exaggerate the palette of blue sea and green palms that lie on either side of it. The black underworld makes the water look like petrol but don't be scared - there's been no oil spill and the water is calm enough for a swim.

Why the hue: When hot lava flows into cold seawater not only does steam rise but tiny black splinters arise from the change of temperature, which end up deposited on Hawaii's shores. The startling colour may also occur from the physical erosion of basalt. A phenomenon unique to this beach is a freshwater spring that seeps into the sea water, creating what locals call koa (fish houses), thanks to the sea life that occupies the natural enclaves.

What to do: Black sand is welcoming even on a cold day as these beaches remain warm year-round. The most spectacular sight you will see on this beach are the numerous Hawaiian green sea turtles that are drawn to the heat-keeping ability of the sand. Conspicuous against their black backdrop they sweep their way through the sand to bask in the sun. Be prepared to make room for the unique sun bathers and remember beach protocol - you can ogle but you cannot touch.

Take me there: From a distance, the surrounding landscape and the sand on this tiny cove beach looks overrun with algae. Green beaches are a Hawaii speciality and while this one is accessible to the public, it can only be reached by hiking or via 4WD. Bordered by sandstone cliffs, this spot is also known as Green Sands Beach or Mahana Bay.

Why the hue: Sand is replaced by olivine crystals crushed by the ocean's machinations. Were they any bigger, the tiny shimmering splices would be peridot gem stones. Hawaii is a testament to the power of tectonic forces and the olive crystals chip off from balsatic lava rocks. Nicknamed Hawaii's diamonds, the crystals are so heavy that waves drag the lighter particles back out to sea, leaving the glittering green ground intact.

What to do: Try your luck scooping through the crystalline sand as rumour has it that gems have been found large enough to sell to jewellers. The four kilometre hike through lava fields should leave you pretty exhausted, but if there is some energy left in the tank, try your hand at snorkelling. The green backdrop makes the water an eerie colour and a quick dip becomes a once in a lifetime experience.