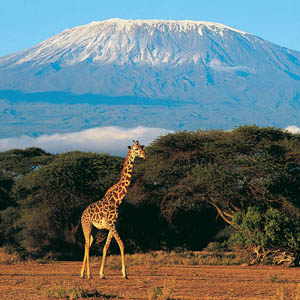 Climbing Mt Kilimanjaro is one of the most challenging travel experiences in the world. TW's roving reporter put herself to the test

The mountain bursts into view, its snowy peak poking defiantly through thick puffs of cloud, as our tiny propeller plane buzzes around it like a gnat. In seven days' time I will be standing right there on that very summit, an emotional wreck. My toes will be frozen, my legs will ache and my lungs will fail. I'll be wondering what possessed me to take on all 5895 metres of Mt Kilimanjaro, Africa's highest peak.

The first morning that we set foot on the mountain, the summit is still obscured by clouds. Setting off on the lesser travelled Rongai route, our porters race ahead of us - our backpacks, entire campsite and supplies for the coming week balanced on their heads.

We're on the lookout for animals, but while elephants and giraffes roam the plains that surround Kili (as it's colloquially known) it turns out that monkeys are all we're likely to see on the mountainside. Thankfully, the bushy tails of the black and white colobus monkeys are easy to spot, dangling between the glossy green leaves.

Soon, those leaves give way to scrub and our three hours of trekking comes to an end at Simba Camp at 2650 metres, where we spend our first night under canvas. There's a long journey ahead and I've been told that of all those people crazy enough to attempt to reach the summit of Kili (roughly 25,000 people each year), around one third don't actually make it.

The next morning we set off shortly after dawn, with seven hours' trekking ahead of us. "Pole, pole," our guide Joseph calls. The words are a warning in Swahili to pace ourselves. But it's difficult to walk slowly while balancing among loose shingle and tangled shrubbery. Four hours in, we pause to refuel in a cave set in the mountainside. As if by magic, the cook pulls a tasty three-course lunch from clattering pots in the craggy corner - cucumber soup, chicken stew and sliced tropical fruit - and we pounce on it fast.

Wiping our mouths, we then set off again. Three more hours of trekking will take us to our next camping spot - Kikelelwe Camp at 3600 metres. "Sippy sippy," is Joseph's next command. Obediently we suck from our water bladders, mindful of earlier warnings we should be drinking between four and five litres a day. But we just aren't used to imbibing so much in such a short space of time. The need to pee comes frequently and urgently.

"Pissy pissy," Tim calls from the back of the line. Joseph laughs patiently as the line grinds to a halt. The sound of zippers opening is heard as darkness and damp close in.

The next day we set out bright and early once again, but the altitude is starting to have an impact with headaches, stomach upsets and flatulence taking hold. "Oops, sorry!" Harry mutters for the umpteenth time. And it's not just Harry who's exploding at frequent intervals, it's everyone. "Better out than in," approves Dr Beks - words that the boys take as encouragement to follow Harry's vile lead. "Torpedo coming through," says Marty. "Fire in the hole," says Rambo.

Thankfully, just over the next hill, we spot our campsite. And it's a beauty. At 4300 metres, Mawenzi Tarn lies at the foot of Mount Mawenzi, complete with an oasis-like pool of water and breathtaking views down the mountain. Even the long-drop doesn't smell so bad. Two nights in the same camping spot with the sun shining starts to feel like a holiday. We go for a three hour trek up into the hills surrounding the camp in the morning, with the rest of the day at leisure. The extra night here will help us acclimatise, before we make our way along the mountain's long saddle to Kibo Camp at 4750 metres. There we'll rest for just a few hours before making our final ascent.

Summit night arrives. We trek for six hours in the pitch black, lashed by chilling winds. We zigzag up the near vertical face of the mountain, through slippery gravel, then larger rocks. It's almost impossible to breathe. My water and snacks have frozen solid.

When we arrive at Gilman's Point on the crater rim, 5795 metres above sea level, I'm a little light-headed from lack of oxygen. This white landscape of dramatic glaciers, icy pillars and vast frosted lakes high above the clouds is like another world. But we still have another two hours to go until we get to Uhuru Peak - the summit of the mountain. Mercifully, the sun is now creeping through the breaking clouds and we can see the crater rim arcing away from us in the distance. A collective resolution sets in - we're determined not to let Kili get the better of us.

"Let's keep moving," our guide Peter urges. If we stay still for too long, we will freeze. When we finally spot the famous green sign that marks the end of our journey, we're numb with cold and exhaustion. It's hard to comprehend or even care that we've actually made it. But we have. We're standing on top of Kilimanjaro. The gruelling trek, the bone-chilling cold - even my companions' bouts of odorous gas - it's all been worthwhile to experience this moment.