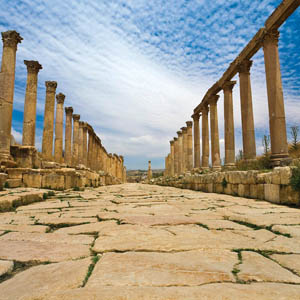 For the people of the ancient Roman Empire, especially the men, chariot racing was the equivalent of an exciting Friday night at the footy.

And it's not difficult for me to imagine this sport taking place, given that I'm standing in a hippodrome in one of the world's best-preserved Roman provincial cities - Jerash. Although it's one of the smallest known hippodromes around, with dimensions of 245 by 52 metres, it would have held 15,000 spectators in its day. But this is a sizeable number when you consider that Jerash's peak population was estimated at 25,000.

The lost city of Petra, which this year celebrates 200 years since its rediscovery, may be Jordan's best known tourist site, but Jerash is one of the best-preserved Roman provincial cities in the world. Located 40 minutes from the Jordanian capital of Amman, its ruins are nestled in a quiet valley among the mountains of Gilead. And it's this remoteness that has kept a sizeable amount of it intact over the many centuries. This would have been one impressive city in its prime - around 150AD - with its magnificent temples set above colonnaded walks.

On this hot and dusty summer's day, we're following our guide Mahmoud, a qualified archaeologist, around this massive site, exploring its many nooks and crannies. We've already explored the dramatic Hadrian's Arch - the first glimpse one has of Jerash upon arrival. The elaborately designed structure was hastily built to form a new southern entrance to the city when Emperor Hadrian paid a personal visit in 129AD.

The site of Jerash has been occupied since about 3200BC, having been established by soldiers of Alexander the Great. The Romans conquered it, led by General Pompey, in 63BC and it became part of the Roman Empire's Decapolis of 10 major cities. It was an affluent place and in its pomp it was home to 15 churches, many featuring superb Byzantine mosaic floors. The reason for its affluence was that it was linked with a major trade route called the Via Nova Triana, which stretched from Bosra in modern day Syria to the Red Sea.

Jerash became a bit of a backwater when the entire province of Syria was occupied by the Arabs in 636AD. However, it wasn't until the major earthquake of 747AD, which destroyed much of the city along with almost every other significant historical site in Jordan, that continuous occupation ended. By the 13th century, the place was described by an Arab geographer as a field of ruins and completely uninhabited. Luckily, the sand and debris from the earthquake and the intervening years covered the city and is part of the reason it is so well preserved today. The city was re-discovered by German Ulrich Jasper Seetzen in 1806 and the excavation continues today.

The city's monuments subtly blend elements of the Greco-Roman culture with that of the Arab-Orient and show the panoply of religious eras and influences. For instance, under one of the churches the remains of an ancient synagogue with detailed mosaics of the story of Noah and the flood was found. Many parts of the original buildings are still intact, thanks to the superior engineering and building methods used, while careful restoration work has been undertaken by archaeologists.

We next visit some underground vaults - where well-preserved fragments of buildings are displayed, still showing the plaster and bright coloured patterns that decorated their interiors. Jerash is sometimes called the Pompeii of the East, but because many of the imposing public buildings are still standing, this site seems far more impressive to me. This is especially the case when we enter the amphitheatre, where the three-week long Jerash Festival is held every July and August.

Finally, we enter the most impressive part of Jerash, where an oval forum joins the main colonnaded street called the Cardo Maximus. It sits between two Roman temples, which were dedicated to Artemis and Zeus.

It's hard to keep track of all the cultures that held sway at Jerash over the years - but it surprises me to learn that the Crusaders (who were in action between 1100 and 1300AD) converted the Temple of Artemis into a fortress.

But if you get a kick out of history and antiquity, then Jerash is a must see part of Jordan. Visit during the peak tourist months of March to June or September to November and you can even check out the Roman Empire's most popular sport, with the Jerash Heritage Company staging chariot races as well as mock gladiator contests in the hippodrome.

The writer travelled courtesy of the Jordanian Tourism Board and Royal Jordanian Airlines.