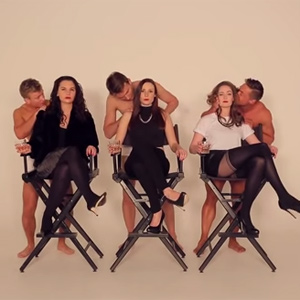 Three New Zealand law students have decided to blur some lines of their own by making a ‘feminist parody’ of the controversial No.1 hit Blurred Lines.

Three New Zealand law students have decided to blur some lines of their own by making a ‘feminist parody’ of the controversial No.1 hit Blurred Lines.

The hit song, by North American singer Robin Thicke, has attracted controversy for its lyrics, which have been deemed “rape-y” by some online commentators, and its video, which sees the song’s three fully-clothed male performers (Thicke and rappers T.I. and Pharrell) cavorting with near-naked female models.

So, in response, three female Auckland law students decided to make a parody version of the song – called Defined Lines – as part of the University of Auckland’s Law Revue, the New Zealand Herald reported.

The singers – Adelaide Dunn, Olivia Lubbock and Zoe Ellwood – perform their own lyrics to the catchy tune while cavorting with men in underpants (screenshot of video pictured above).

The lyrics were written by Dunn and include lines like: “Boy you’d better quit all your sexist ways; So hear our manifesto of the modern age; It's time to undermine; The masculine confines; Coz we don't wanna grind”.

The law students told the NZ Herald: “We just want some people to think about the original video and some of the reactions people have had to it; it is meant to be taken tongue in cheek.

“We understand that it is a common theme in the media for particular men to have videos with women frolicking around and stuff like that, but the attitude of the whole thing came across to us as being quite arrogant, especially with the issue of consent, some of his lyrics were quite questionable and a bit presumptive.”

The video, which has had close to 400,000 views since it was uploaded to YouTube on Friday (30 August), is far from the first parody of the Thicke song, with a Muppets version even appearing on YouTube.