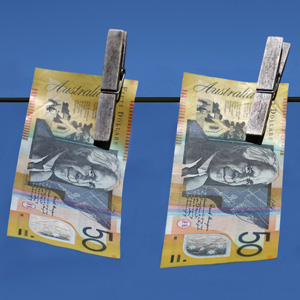 A potential plot for the next Underbelly TV romp could be approaching its denouement with news that an unnamed Melbourne lawyer has been charged with money laundering following a $4 million armoured van robbery almost 20 years ago.

A potential plot for the next Underbelly TV romp could be approaching its denouement with news that an unnamed Melbourne lawyer has been charged with money laundering following a $4 million armoured van robbery almost 20 years ago.

Victoria Police Assistant Commissioner Steve Fontana said police believe the lawyer may have handled some of the proceeds of the so-called “road gang” robbery, the Sydney Morning Herald reports.

Apart from the mysterious, allegedly crooked laundering lawyer, the storyline has more kitchen sinks thrown in than a Baz Luhrmann home movie.

Police are seeking up to five people over the robbery in which four people posing as road workers stopped the Armaguard van on the Monash Freeway at Richmond on 23 June 1994.

They later escaped in two getaway cars with $4 million. Yes, a real live sting and two getaway cars! It doesn’t get more Sunday night on Channel Nine than that, does it?

Fontana said the unidentified lawyer was charged last week and police are confident they can still trace the stolen money.

“We have charged someone with money laundering offences and we believe that we know where a substantial amount of that money went,” he said on Monday.

Purana Taskforce anti-gangland detectives are now investigating at least one former Armaguard employee over their possible involvement in the robbery, Fontana said.

“We also believe that it was an inside job,” he continued. “Armaguard certainly suspected one of their employees was involved, so we are having a close look at that.”

Folklaw thinks it can’t be long before this latest set of alleged nicked Vic tricksters will be major stars of the Channel Nine Sunday flicks...

Last Updated: 26 March 2014 Published: 26 March 2014
The Women in Law Awards is the benchmark for excellence, recognising the empowering women influencing the Australian legal profession, celebrating the female leaders, role models and future champions of the industry. Register for the waitlist today for the opportunity to attend this remarkable awards ceremony and network with top legal professionals and fellow peers.
Visit womeninlaw.com.au