The pursuit of creative happiness 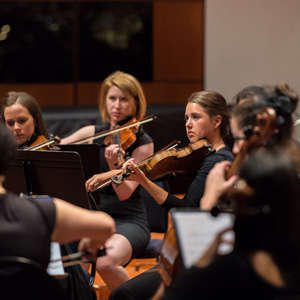 Lawyers in Melbourne have formed a 45-piece orchestra to flex their creative muscles and promote positive mental health.

The Melbourne Lawyers’ Orchestra (MLO) made its debut in Kew, just outside Melbourne’s CBD, last month (22 March). Around 300 people attended the event featuring the works of the Hon. George Palmer AM QC, former Justice of the Supreme Court of New South Wales, and ‘the great composers’ Mendelssohn, Schubert and lawyer-turned-musician Tchaikovsky.

The not-for-profit symphony orchestra is a mix of partners, solicitors, barristers, judge’s associates and law students.

All that’s missing is a judge, said founder and director Aimee Nguyen, who is also a lawyer at Clayton Utz.

Nguyen, a violinist, told Lawyers Weekly she decided to establish the MLO when she realised that music was no longer a regular part of her life.

“I was regretting letting music slip away,” she explained.

She soon discovered there were many other musically-inclined legal professionals with the same regret; more than 120, in fact. Nguyen held auditions and whittled down that number to 45.

“We were really thrilled at the response and receive more expressions of interest each week,” she said.

The MLO is supported by BottledSnail Productions, which recently held a comedy stage show at the Melbourne International Comedy Festival.

Proceeds from both events went to the Tristan Jepson Memorial Foundation (TJMF), which is about to launch a set of voluntary industry guidelines that help firms and other organisations improve psychological health and safety in the workplace.

Nguyen commented that the nature of legal work, which is adversarial and involves long working hours, is contributing to the high rate of depression among lawyers.

“We want to help encourage and promote good mental health and wellbeing by offering an opportunity for people to engage in other pursuits ... being involved in something different to law is important to provide balance to people’s lives [and] help combat the effects of mental illness,” she said.

Nguyen added that the benefits of engaging in creative pursuits can be seen at MLO rehearsals where lawyers “let go of [the adversarial] side of themselves”.

Check out our photo gallery below for highlights from the event. Photos by Shaan R. Ali.

The pursuit of creative happiness