Slap on the wrist for lawyer who slept with his client 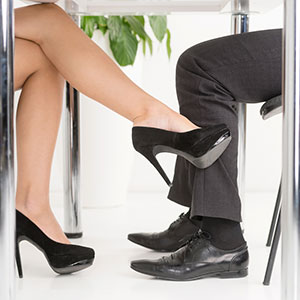 When attorney Mark Ruppelt thought he could get away with initiating a sexual relationship with a 27 year-old female client, he thought wrong.

Lawyers are a little like pirates – both refuse to tolerate those who break the code.

So when attorney Mark Ruppelt thought he could get away with initiating a sexual relationship with a 27 year-old female client, he thought wrong.

The American Bar Association’s code prohibits sexual contact between attorneys and clients unless a sexual relationship was established before the client-lawyer relationship commenced.

The pair of law-crossed lovers in this tale are now married but this did not stop the Office of Lawyer Regulation (OLR) from dragging Ruppelt to the Supreme Court to have him publically reprimanded for misconduct.

Ruppelt was working as a partner at US firm Gatzke & Ruppelt SC, which is based in Milwaukee, Wisconsin, when he was asked by his future wife to represent her in a civil claim.

In 2008 Ruppelt brought a case against her former teacher who was alleged to have sexually assaulted Ruppelt’s client when she was a student at school.

By April 2009 things had started to get a little more romantic. Let’s just say Ruppelt “negotiated a merger” with his client.

Ruppelt’s change in behaviour did not go unnoticed at the firm and, shortly after the sexual relationship began, senior attorneys at the firm, James Gatzke and Paul Bucher, called Ruppelt into the office to question him.

Ruppelt flat out denied he was fraternising with his client and refused to admit that any personal e-mail, texts or voicemail messages had been exchanged with the woman he was representing in court.

The client also lied about the affair when she was interrogated by a member of the firm.

Folklaw thinks the love birds would have done better to fess up but they kept silent for some time.

In May Ruppelt finally caved, acknowledging to Gatzke that he was guilty of fornicating with his client. For some reason, when the OLR came to investigate, he slipped back into lies, telling the regulatory body that nothing was going on.

The couple married in June 2010 but Ruppelt couldn’t escape public reprimand. Two years after the wedding he found himself in front of Supreme Court judges facing four counts of misconduct.

On top of a formal slap on the wrist, Ruppelt was forced to pay the $10,000 legal costs incurred by the OLR during the proceedings.

For the sake of honesty, Folklaw has to question the client’s taste. What were you thinking? Ruppelt must have a charming wallet because he really isn’t much of a looker…

Slap on the wrist for lawyer who slept with his client