Judge banned for shocking defendant with 50,000 volts of electricity 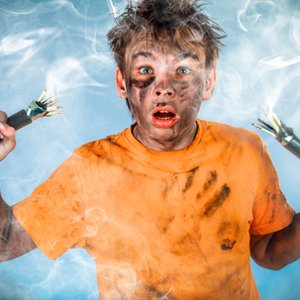 What is a judge to do when yelling “Order in the court!” has zero effect on a riotous defendant?

What is a judge to do when yelling “Order in the court!” has zero effect on a riotous defendant?

The incident, which eventually led to the removal of Judge Nalley from the bench, occurred last July in La Plata, Maryland.

Delvon King appeared before the court with a Stun-Cuff around his ankle.

King was on trial for possessing an illegal weapon and had earned himself the treacherous anklet after he made an attempt to escape mid-trial in April.

The stunning device is used by law enforcers to prevent escapes and control violent behaviour by delivering painful shocks.

The accused rocked up at the court lawyer-less and ready for a fight. He presented what the judge considered to be a diatribe of mindless twaddle as to why he was a “sovereign citizen”, for whom US laws did not apply.

He went on and on, talking over the judge and refusing to answer questions.

Fed up, the judge turned to deputy sheriff Charles Deehan and ordered him to zap the defendant.

After two false starts, 50,000 volts shot up King’s leg and he fell to the floor in pain.

The court clerk then dutifully wrote down in the transcript, “(DEFENDANT SCREAMS).”

Judge Nalley, as if unaware that 50,000 volts might hurt rather a lot, calmly enquired as to whether King was ok and graciously permitted him to sit during the rest of the proceedings.

While Folklaw can imagine that every judge has moments when their patience wears a little thin, we have to agree with state public defender Paul DeWolfe’s opinion on the matter.

“For a judge to inflict physical pain for the sole purpose of silencing an individual is unacceptable,” said DeWolfe.

“In a court of law, it is the judge’s responsibility to protect the rights of those involved in the process, not to violate them.”

This isn’t the first time Judge Nally has acted out of line. In 2010 he got into considerable trouble for having a temper tantrum about not being able to park his car and deflated the tires of a car parked in his courthouse space.

Judge banned for shocking defendant with 50,000 volts of electricity