Corrs CEO jumps off a skyscraper 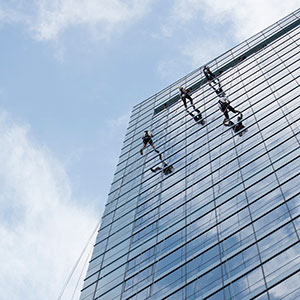 Folklaw has heard a lot of ambitious charity fundraiser ideas in its time, but this is one of the most terrifying.

Folklaw has heard a lot of ambitious charity fundraiser ideas in its time, but this is one of the most terrifying.

Corrs Chambers Westgarth CEO John Denton led a team of lawyers on a 33-storey abseil down a building in Sydney last Friday (17 October).

The Corrs teams would have had a dazzling view across Darling Harbour as they contemplated the *shudder* 135-metre drop from the top of 1 Market Street.

But, apparently, facing one’s fears is an integral part of being a Corrs lawyer/warrior.

“We are fearless in our commitment to creating success for our clients by providing a new level of legal service, and it is this same passion Corrs brings to this challenge,” said Denton.

Andrew Lock, a Sir David Martin Foundation ambassador, assisted team Denton in the descent. He is a high-altitude mountaineer and the first Australian to climb all 14 of the 8000-metre summits, including Mount Everest.

“Each year participants face varying degrees of fear – I would safely say that there is generally not one person up there who doesn’t have at least a twinge of fear,” said Lock.

The money raised will go to the Sir David Martin Foundation’s Triple Care Farm as part of ‘Abseil for Youth’ campaign.

The foundation helps homeless youth turn their lives around by getting them off the streets and into care and rehabilitation programs.

Triple Care Farm is a camp for young people in the Southern Highlands, which equips them with the necessary skills to overcome their addiction and mental health issues.

Click on the pics below for more highlights from the day.

Corrs CEO jumps off a skyscraper