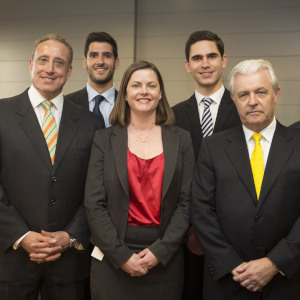 The Chartered Institute of Arbitrators (Australia)/Young Lawyers International Arbitration Moot is an annual competition and the only one of its kind in Australia. As Erika Williams reports, it is a wonderful opportunity for young lawyers (under the age of 35) and law students to experience the real world of arbitration.

The Chartered Institute of Arbitrators (Australia)/Young Lawyers International Arbitration Moot is an annual competition and the only one of its kind in Australia.  As Erika Williams reports, it is a wonderful opportunity for young lawyers (under the age of 35) and law students to experience the real world of arbitration.

I participated in the moot in 2012 and found the experience to be extremely beneficial for a number of reasons.

Firstly, I had studied International Commercial Arbitration at university and the moot provided me with the opportunity to take the legal principles I had learned and apply them in what was like a real-life situation, as if I was counsel preparing the case for a client.

Secondly, having to prepare written submissions for the parties and then present those submissions in the oral hearing gave me the confidence to prepare position papers and submissions in my role as an associate in the dispute resolution group at global firm Baker & McKenzie.

The other reason I found that participating in the moot has helped me with my career is the networking opportunities.

Students are paired with lawyers and meet peers who can give them guidance about a career in arbitration. I know that I met some great people who were fellow participants in the moot and I see them regularly at various arbitration-related functions. Volunteer arbitrators are made up of senior counsel, in-house counsel, partners and associates from prominent law firms and past participants in the moot who work in the field of arbitration.

The opportunity to present oral arguments and even just to mingle with these experienced international arbitrators is invaluable.

I found the moot to be of such great benefit that I jumped at the opportunity to organise it in 2013, as vice-chair of the NSW Young Lawyers’ International Law Committee, and again in 2014 as chair. This year, the moot attracted participants from all over Australia and a record attendance at the finals. This broad participation demonstrates the appeal of arbitration among young lawyers and law students and has cemented the moot's place as a progressive and high quality competition.

On Saturday 27 September 2014, 22 young lawyers and law students competed in three rounds of mooting in front of arbitral panels, which each consisted of three experienced arbitration practitioners, followed by the semi-final. All teams had the opportunity to represent both the claimant and respondent in a problem question that incorporates the common issues that arise in international arbitration.

At the end of the day-long proceedings, two teams emerged as finalists.

On Tuesday 30 September 2014, these teams made their oral submissions in front of an arbitral panel, which included Albert Monichino QC, CIArb Australia president; myself, as chair of the NSWYL International Law Committee; and the Hon Justice Lindsay Foster, NSW List Judge in the Federal Court of Australia for International Arbitration.

This was the first time a member of the judiciary has participated in the moot.

On reflection, I can see that participation in the moot has cemented my path as an international arbitration practitioner.

I was awarded the prize for Best Oralist in 2012, which earned me a place on the CIArb Diploma in International Commercial Arbitration course, which I completed in March 2014. Being on the panel of judges for the final this year exemplifies the respect I now have from colleagues in the arbitration sphere as a qualified practitioner in international arbitration.

Spirit of the Moot

Erika Williams is an Associate at Baker & McKenzie who practices in international commercial arbitration and general commercial litigation. She also advises in private international law and issues arising from cross-jurisdictional disputes.