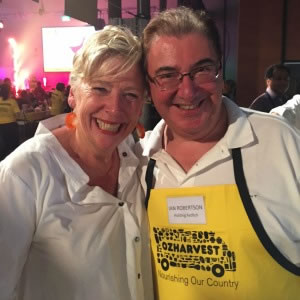 It is said that too many cooks spoil the broth, but OzHarvest can’t get enough CEOs and managing partners in aprons as part of the organisation's CEO CookOff to raise awareness of food rescue.

This year, 123 corporate heavyweights took part in the event at the Carriageworks in Sydney, along with 40 celebrity chefs.

Their combined cooking efforts generated enough food for approximately 1,000 people in need and the event raised almost $1 million in donations.

OzHarvest is a charity that collects surplus fresh perishables from businesses and distributes them to agencies that assist disadvantaged and homeless people.

“It was a pleasure to be able to support OzHarvest,” said Mr Robertson, who was part of a team headed by celebrity chef Maggie Beer (left).

“As well as raising awareness of the issue of food security and waste, OzHarvest does great work in supporting homeless people and youth in crisis.

“It was an added bonus to be able to work with Maggie whose business success and dedication to great food is quite inspirational,” he said.