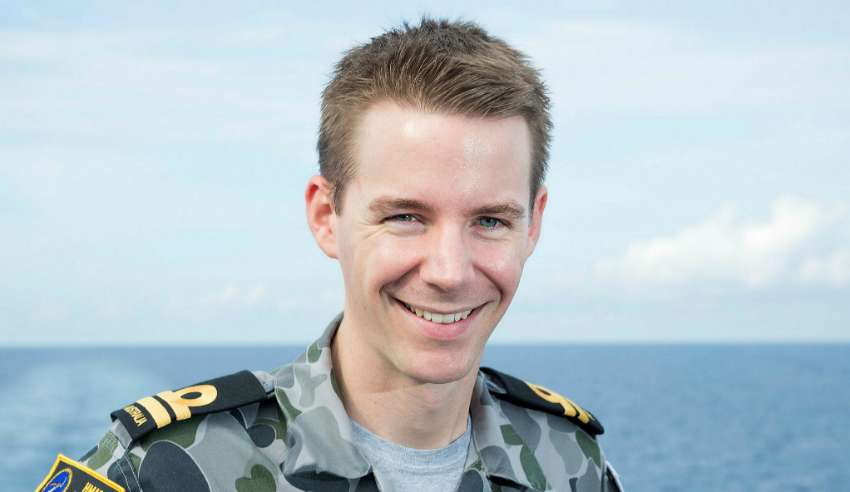 It was the ultimate sea change for litigation lawyer Tim Quadrio when he jumped ship to leave a boutique firm in Sydney and joined the Royal Australian Navy.

Two years ago a Sydney-based commercial litigation and insolvency lawyer resigned from a firm he loved to embark on a new professional course – with the Royal Australian Navy (RAN).

Lieutenant Tim Quadrio (pictured) said his decision to walk away from a career in commercial law came as a surprise to many of his family and friends.

“Although the idea of practising as a navy legal officer was something I had thought about while at law school, the idea of leaving commercial law and to join the Navy took my colleagues, friends and family by surprise.”

The Navy legal officer graduated from Macquarie University with Arts/Laws honours in 2012.

Two-and-half years after his admission and carving his place in the commercial litigation space, he chose to leave his job at boutique firm William James. Now his office is a warship.

In his current capacity with the Australian Defence Forces, Lieutenant Quadrio advises on international law and provides support to command with legal advice on service discipline and administrative matters.

“These fundamental processes help ensure that we maintain a disciplined and ready force,” Lieutenant Quadrio said.

“My primary task is to make sure the warships in our task group comply with international law, particularly the law of the sea.

“Australia has always strongly advocated for a rules-based international legal order, and while the Australian government does this through international institutions like the United Nations, the Royal Australian Navy does it at sea every day of the year.

“In exercising our rights in accordance with international law, this task group is reinforcing the rules that underpin the security and prosperity of our region,” he said.

Earlier this year Lieutenant Quadrio was deemed fit to serve as a legal officer on overseas operations. Before receiving the go-ahead to serve abroad he had to pass the Joint Legal Operations Training course at the Military Law Centre in Sydney.

He said that this particular training involved rigorous assessment: “Including takings that commence at odd hours overnight, to replicate operational conditions. Legal officers are required to pass the course before they can [be deployed] on ADF operations overseas.”

“The Joint Operations Legal Training course at the Military Law Centre is an intensive residential course where military lawyers are trained and assessed in their ability to advise operational commanders.

“This involves advising on the practical application of the Law of Armed Conflict and other legal aspects relevant to military operations,” Lieutenant Quadrio added.

Three weeks after completing the course he was deployed to sea as part of the Indo-Pacific Endeavour task group. According to the RAN, it is the biggest naval task group that Australia has deployed in 30 years.

“This is the first time Australia has deployed a task group of this size in my lifetime,” Lieutenant Quadrio said.

While working for the RAN, he has also obtained a graduate diploma in military law from the Australian National University.

Lieutenant Quadrio is currently embarked in HMAS Adelaide and is based in the Northern Territory when he is not at sea. Without the support of his wife and children, he said that his career would not be possible.

“I would not be here without their understanding and belief. I hope I can make them proud.”

He added that his former commercial law colleauges in Sydney have also shown an ongoing interest in his transition from civilian solicitor into seagoing legal officer.

“The team at William James have regularly checked on me to see how my naval career is progressing since I left the firm in 2015,” he said.