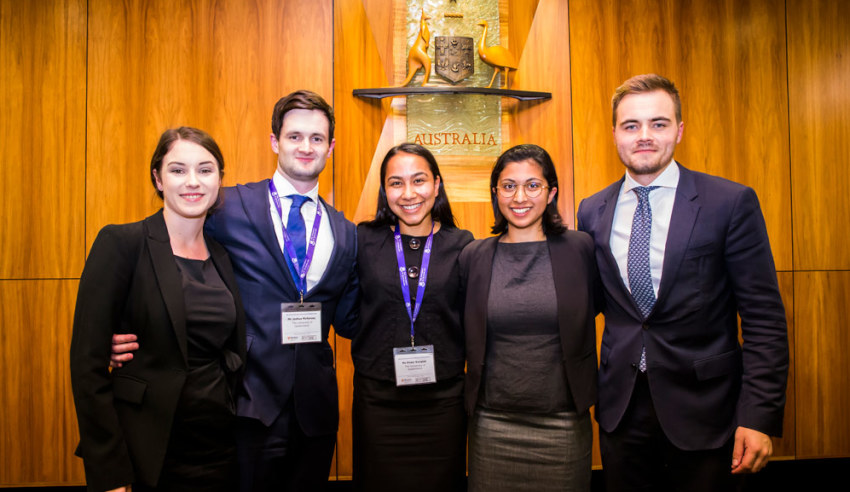 The University of Queensland has won its second major international mooting title of the year, after coming out on top of the 19th International Maritime Law Arbitration Moot Competition (IMLAM).

IMLAM requires law students to develop a case based on a scenario involving a commercial shipping dispute and put it before a tribunal comprising of experienced maritime arbitrators, maritime industry members and commercial maritime lawyers.

The UQ team defeated the University of Hong Kong in the grand final, which was held at the Brisbane-based Federal Court of Australia.

TC Beirne School of Law head of school Professor Patrick Parkinson said the team’s hard work and months of preparation had been rewarded.

“I would like to extend my sincere congratulations to Sangeetha, Laura, Joshua and Priam, and thank Dominic and Professor Gaskell for their support and guidance to the team,” he said.

“Mooting requires students to hone their research, advocacy and presentation skills, and our students have proven twice this year that they are the best in the world when it comes to demonstrating these highly sought-after legal skills.”

From lawyer to author: The legal books that hit shelves in 2020 Paralegal sues Brisbane firm over COVID-19 pay reductions ‘Top of their game’: What it’s like to work as a BigLaw graduate Protégé: Standing out in a pool of applicants with the Law Student of the Year The clarity and camaraderie of 2020