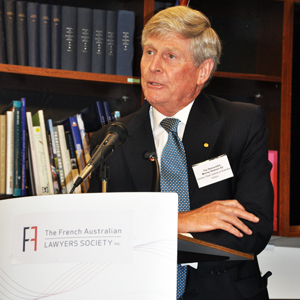 Former chief justice the Hon Murray Gleeson called for greater collaboration between French and Australian lawyers at the launch of the French Australian Lawyers Society (FALS).

At the launch cocktail party last week (21 February), which was attended by around 80 French and Australian lawyers, Gleeson (pictured), who is also the society’s patron, said the legal fraternity in both countries can learn from each other’s systems of law.

“There’s a high level of interest from both sides of the mix here in one another’s systems and practices ... the time has long passed for mutual incomprehension between civil law and common law,” he said.

Consul-General of France in Sydney and patron of the society Eric Berti also encouraged a closer working relationship between the French and Australian legal fraternity at the launch event.

“It is necessary to see what common ground there is between us,” he said.

FALS was established to provide a formal structure to the Young French Lawyers group, which had been meeting informally to share experiences in studying and practising law in Australia since April 2011. Barrister and president of the society Sandrine Alexandre-Hughes explained that the Society wanted to “meet under the umbrella of a more formal structure, which would also include more experienced French lawyers”.

“As the idea of a more formal structure emerged, we realised that many of us had a number of Australian colleagues who were genuine Francophiles with an interest in the civil law system,” she said. “The obvious step to take was to bring together these two groups.”

The society aims to strengthen the knowledge of French law among Australian lawyers and vice versa, as well as promote the mutual understanding of both legal systems and facilitate diploma recognition across both countries.

Check out the below photo gallery for highlights from the event.