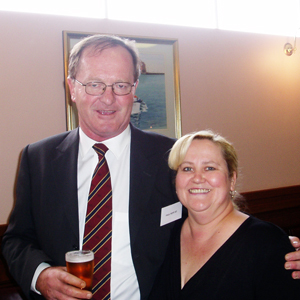 Paul Rofe, SA’s first director of public prosecutions (DPP), was flawed but was also “a very decent bloke” whose dedication to the practice of law remained strong to the day he died, a friend and former colleague at the Bar has said.

Rofe (pictured left) died last week (7 May) from heart failure, having been in ill-health for a number of years. But a string of serious health problems, including lung cancer and a stroke, didn’t stop him practising as a lawyer, which he did right up until his death, according to barrister Nick Niarchos, a friend for more than 30 years who, together with Rofe, set up Elliot Johnston Chambers in Adelaide.

“We were both discussing recently that we were looking forward to a decent retirement, but that wasn’t to be,” Niarchos told Lawyers Weekly.

Rofe was admitted to practice in 1973, became a QC in 1991 and was SA’s inaugural DPP from 1992 to 2004. In that time he stirred controversy over his views on decriminalising marijuana, free heroin trials for addicts and publically shaming paedophiles.

But Niarchos said Rofe didn’t have an axe to grind during his term as DPP, nor did he have an agenda when prosecuting crimes.

“He wasn’t perfect but he was a very decent bloke,” he said. “He was a fair, well-rounded prosecutor ... [who] understood well the duty of a prosecutor is not to simply achieve convictions but to ensure fair process and a fair trial.”

Niarchos, a criminal barrister at the time, said the prosecutor was a powerful adversary: his voice soft yet unmistakable; his style understated, yet “very clear and persuasive”.

He went from adversary to colleague when the pair started Elliot Johnston Chambers in 2004, the year Rofe resigned as DPP amid controversy over his handling of a high-profile case. Rofe had negotiated a plea bargain with the lawyers of Paul Nemer, who shot newspaper deliveryman Geoffrey Williams through the eye. The sentence of a suspended jail term and $100 good behaviour bond sparked public outrage for its leniency.

A report by then solicitor-general, and current chief justice, Chris Kourakis described Rofe’s handling of the Nemer case as “inept”.

Despite the criticism levelled at him, Rofe remained a highly-respected member of the legal profession. Soon after he left the Office of the DPP, then president of the Law Society of South Australia David Howard said Rofe’s “fairness, integrity and generally sound judgment are legendary”.

“Rofe’s legal career, particularly during his 12-year tenure as DPP, was defined by a principled and even-handed application of the law,” he said.

“He was a man of great conviction, and handled many challenging criminal cases with impressive professionalism and fair-mindedness.”

Outside the law, Rofe had a keen interest in Aussie rules football. He played more than 200 games for Adelaide University as a centre half-forward and was named captain of the All-Australian amateur team in 1974. He maintained his connection with the sport later in life, becoming director of the Adelaide Crows from 1999 to 2003.

Rofe attended football matches religiously, said Niarchos: “Life outside the law very much revolved around footy.” But Rofe’s passion for sport also extended to gambling and, in 2003, he was filmed by a TV crew visiting the TAB 10 times in one day.

Rofe never married or had children. He enjoyed socialising and had a wry sense of humour, revealed Niarchos.

“He enjoyed a drink as well as anyone else,” he said.

“I remember Paul, in his wry and softly-spoken way, enjoying a joke and having a great sense of humour and sitting around our chambers having drinks, just chatting about stuff.

“He was a great colleague, great friend and a pretty wise advocate.”