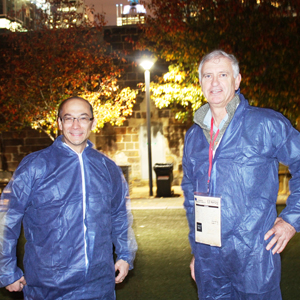 The two senior Melbourne lawyers were happily jailed on 31 May as part of the Whitelion Melbourne Bail Out.
“There needs to be a stronger focus on early intervention programs, which are vital to end the cycle of disadvantage,” said Tang (pictured left with Michael Brett Young), who was motivated to don the blue sleepsuit and sleep rough to highlight that jail is no place for children.

A recent study by Jesuit Social Services of children aged 10 to 12 who were remanded in custody for the first time showed that all of the children surveyed had been involved in the child protection system.

“At-risk young people should be supported in the welfare system – not treated as criminals,” said Tang. “We should have a debate about raising the age of criminal responsibility.”

Now in its eighth year, the annual Whitelion Bail Out is a national event. Its aim is to raise funds for Australian charity Whitelion, which offers support services for young people involved, or at-risk of becoming involved, in the juvenile justice system.

The LIV has raised more than $7000 to help disadvantaged youth this year.

Sydney’s event this year took place on 17 May at the Yasmar Juvenile Detention Centre.

Around 60 people stayed at the Yasmar Juvenile Detention Centre, with participants including members of the Bar and public defender Dina Yehia.