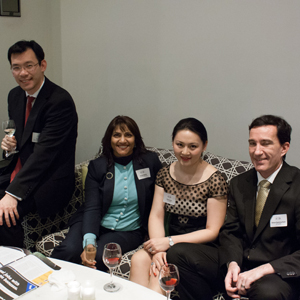 A Sydney barrister has been elected as the first female president of the Australia branch of a global arbitration body.

Rashda Rana from Ground Floor Wentworth Chambers has been elected as the president of the Chartered Institute of Arbitrators (CIArb) Australia.

Rana, who was a finalist in the Lawyers Weekly Women in Law Awards last year in the Legal Mentor category and a judge at the recent 30 Under 30 Awards, is also a board member and fellow of the Australian Centre of International Commercial Arbitration (ACICA), director and treasurer of the global body ArbitralWomen and the only Australian woman on the panel of the Singapore International Arbitration Centre.

“I am deeply honoured to be elected as president of CIArb Australia and see this is as an opportunity to advance the promotion of international arbitration in Australia as well as the role of women in dispute resolution,” Rana said.

Rana, the former general counsel of Bovis Lend Lease, who is also a barrister with Atkin Chambers in London, devised the undergraduate international commercial arbitration course at the University of Sydney’s Law School. She was also responsible for setting up an emergency childcare scheme at the NSW Bar Association.

Her appointment was welcomed by a number of the profession’s leading lights.

The president of the Australian Human Rights Commission and chair of the Council of Australian Law Deans, Professor Gillian Triggs, said: “Rashda is a leader in her field in Australia and an inspiration to young women lawyers in developing their careers as advocates in a competitive global environment.”

ACICA president Doug Jones said: “I congratulate Rashda on assuming the leadership of CIArb in Australia. Her drive and energy will substantially contribute to the continuance of the strong association of CIArb and ACICA in the development of international arbitration in Australia.”

AIDC director and immediate past-president of CIArb Australia, John Wakefield, also praised Rana’s contribution, in her role of education director with CIArb, to the success of the CIArb Diploma in International Arbitration, the nation’s only globally-recognised tertiary international arbitration course.

Rana, who was also previously a partner at Holding Redlich, added: “Demand for arbitration and dispute resolution services is growing at a significant pace around the world, but particularly so in the Asia-Pacific region because of the high level of economic activity, which necessarily results in the increased need for dispute resolution services.

“This is a very exciting time for the Institute and I am very honoured and proud to be leading it.”