Best of the Bar to battle it out 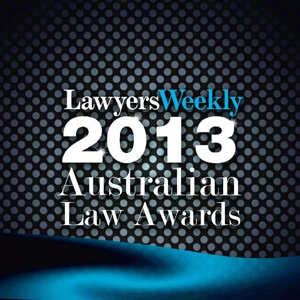 Nine of Australia’s best barristers will be vying for two awards at the 2013 Lawyers Weekly Australian Law Awards, proudly sponsored by List A Barristers.

Nine of Australia’s best barristers will be vying for two awards at the 2013 Lawyers Weekly Australian Law Awards, proudly sponsored by List A Barristers.

For the first time, two dedicated awards that celebrate excellence at the Bar have been added to the annual Lawyers Weekly Australian Law Awards program.

The Awards will be held at Melbourne’s Crown Casino on Friday 26 July. Tickets can be purchased here.

The Junior Counsel Award, proudly sponsored by Sheahan Lock Partners, was open to barristers throughout Australia that have spent less than 10 years at the Bar.

Finalists include Sandrine Alexandre-Hughes, who is the founding president of the French Australian Lawyers Society, which was launched in February this year. The international family law expert was admitted to the Bar in May 2011 and is currently with Queens Square Chambers in Sydney.

The first of two finalists from Foley’s List is Justin Mereine. He joined the Bar two years ago after a decade in private practice. Complex commercial litigation is his area of expertise and he has been published in several legal journals.

Nuala Shaw of 5 Wentworth Chambers, Sydney, and Alfred Lutwyche Chambers, Brisbane, joined the Bar in 2010 and has already carved a niche for herself as a construction and engineering law specialist.

In 2011, she was rated by Doyle’s Guide as “leading” the Bar in construction law. Nuala is a member of the National Association of Women In Construction and the Society of Construction Law.

Jessie Taylor (pictured left) from Foley’s List has taken on a lot in her short career, both at the Bar and outside of chambers. Her areas of expertise include mental health and human rights law, and she was only 27-years-old when she became a foster mother to an Afghan refugee who was just 14 when he travelled alone from Indonesia to Christmas Island in 2009.

The Senior Barrister Award, open to barristers with more than a decade’s experience at the Bar, attracted a strong field of candidates.

The first finalist, Adam McLean from Foley’s List in Melbourne, put together an outstanding submission.

Adam has been a long-time legal advocate for promoting and securing the rights of indigenous communities and this year he was instrumental in helping to achieve a settlement in an application for native title by the Dja Dja Wurrung people in the land and waters around central Victoria.

Jane Needham SC has had a long and distinguished career at the Bar.

Jane is currently the senior vice president of the NSW Bar Association and is a founding member of 13th floor St James Hall. Appointed silk in 2004, she will serve on the silk selection committee for NSW barristers this year.

Two Perth-based barristers are also in the running for the award.

Tom Percy QC is well-known not only for his high-profile clients, who have included Alan Bond, Courtney Love and numerous prominent jockeys, trainers and footballers, but also for his media columns and Talking Law radio program.

Outside the law, Percy fronts an Irish four-man band called the Gang of Three.

Rounding out the impressive quintet of finalists is Tim North SC, the second senior barrister finalist from Foley’s List.

He was appointed a senior counsel in 2002 and his areas of expertise include corporate governance, contractual disputes and regulatory review.

The 10 categories open to private practice and corporate lawyers received more than 100 nominations.

Twelve firms have multiple finalists, with six of those not calling Australia home.

Caroline Kirton SC and Justice Margaret Beazley are among the list of high-profile judges.

Two of the evening’s showcase awards, the Michael Kirby Lifetime Achievement Award and the Advocate Award will be handed out on the night to two of the profession’s leading lights.

Best of the Bar to battle it out