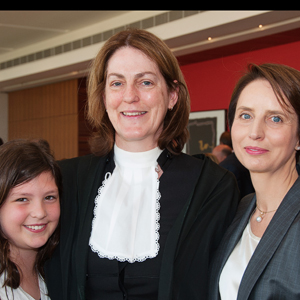 Justice Melissa Perry was sworn in as the newest judge of the Federal Court of Australia at a ceremonial sitting of the Court last week (23 September).

The Speaker of the Federal Parliament, Bronwyn Bishop, attended on behalf of the Government.

Bishop said Justice Perry’s appointment was “a fitting recognition of your long and distinguished career in the law, particularly your 20 years at the Bar”.

“The skills and experience you have acquired will serve you well in your new role, as will your natural intelligence and compassion.”

Justice Perry (pictured above, on right) graduated from the University of Adelaide with a Bachelor of Laws in 1985 and was admitted to the Supreme Court of South Australia as a barrister and solicitor later that year. In 1988 she completed a Master of Laws and, in 1995, was awarded a Doctor of Philosophy – both at the University of Cambridge, where she won the Yorke Prize for her doctorate in public international law.

Justice Perry is currently a member of various legal and academic organisations, including the Administrative Review Council and the Australian Academy of Law, of which she is a director and fellow.

She is also a squadron leader with the Royal Australian Air Force Legal Specialist Reserves.

“Your Honour’s accomplishments and personal qualities will equip you well to make an excellent judicial officer,” said Bishop. “You have an impressive legal mind and deep understanding of legal principles and their rationale. You have been known and sought after for your high-quality work, and admired for your courtesy, patience and kindness.

“Your temperament and integrity positions you to adeptly face the challenges and responsibilities of this appointment.”

Also speaking at the swearing-in ceremony was: Fiona McLeod SC, who welcomed Justice Perry’s appointment on behalf of the Law Council of Australia; Jane Needham SC, who praised Justice Perry’s role as a mentor during her time with the NSW Bar, and John Dobson, the president of the Law Society of NSW.