Barrister lauded in UK and Australia 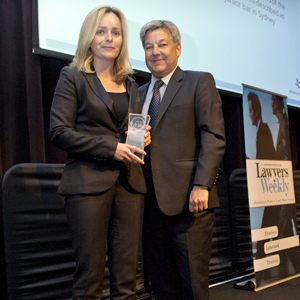 The winner of the Sheahan Lock Partners Junior Barrister Award can place that trophy next to major British academic honours.

Dr Ruth Higgins from Sydney’s Banco Chambers took out this Award, which is open to barristers who have been at the Bar for less than 10 years.

“I am very grateful to receive this,” said Higgins from the winner’s podium. “It is particularly gratifying to receive it in a room full of so many women who are not only distinguished amongst themselves but distinguished generally across the legal profession and across Australia.”

Higgins began her legal career in Australia after excelling in academia in the 1990s in the UK. The Scotland native was awarded a university medal from the University of Glasgow for being the Most Distinguished Graduate in Law and, when studying for a doctorate in philosophy at Oxford University’s Balliol College, she was awarded three prestigious scholarships.

When she arrived in Australia just over a decade ago, Higgins first landed a spot at Gilbert + Tobin before being admitted to the Bar in 2006.

In a short space of time she has already garnered a reputation for legal excellence, and has co-edited two publications with Justin Gleeson SC.

“I regard her as one of the most gifted juniors I have worked with in the course of my 30-year career as a litigation lawyer and partner,” wrote one referee from a major global law firm. “In my view she is already regarded as one of the leading lights of the junior bar in Sydney.”

In presenting the Award, he made the observation that some barristers are reticent to take on certain cases involving large organisations.

“If I can say something about the profession that concerns me a little bit it is that junior barristers are telling me they would love to take that brief, but we shouldn’t really act against that particular company,” said Sheahan.

“I would urge all junior barristers to make your undoubted talents available to all clients, not just the large, seductive, institutional clients.

“There will always be plenty of interesting work for the best and the brightest.”

Speaking to Lawyers Weekly at the Awards, a well known and respected barrister said that the cab-rank rule continues to be followed by barristers throughout Australia.

Sheahan also paid tribute to junior barristers while on the podium.

“We all know deep down that it the junior barrister who often drives those brilliant advices which are signed by QCs and SCs,” he said.

Barrister lauded in UK and Australia