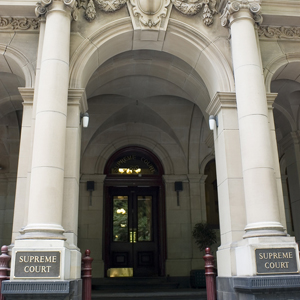 The barrister who led the royal commission into the Black Saturday bushfires has been appointed a judge of the Supreme Court of Victoria.

More recently, he was hired by Essendon to represent the football club in its legal battle with the AFL over possible charges linked to the Windy Hill supplements scandal.

Rush, a former chairman of the Victorian Bar Council and executive member of the Law Council of Australia, is also well known for representing Wittenoom miners with asbestos disease in a test case against James Hardie that cleared the way for other compensation claims.

A captain in the Royal Australian Navy Reserve, Rush has led numerous military investigations. He appeared at the 2006 Board of Inquiry on behalf of families affected by the crash a navy Sea King helicopter in Indonesia and assisted during the Cole inquiry into the World War II sinking of HMAS Sydney.

Rush was admitted to the Victorian Bar in 1978 and appointed Queen’s Counsel in 1992. His legal practice has spanned common law, administrative law, criminal law, military law and trade practices law.