Photo gallery: Women with a lot to celebrate 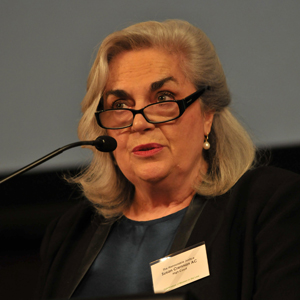 Justice Crennan (pictured) was the keynote speaker at last month’s (16 April) Celebration of Women in the Law event held in Melbourne, which attracted around 360 guests.

She detailed women’s progress in private practice, the Bar and the judiciary over the past century, from Ada Evans, the first female graduate of an Australian law school, to her own appointment as Victoria's fourth female silk in 1989.

“Time has been on the side of women in many respects,” she said.

“In law schools, private enterprise, the public sector, and law reform, in both branches of the legal profession as practised in Victoria and in the wider world, women are contributing as never before to the law.”

Crennan recognised a slew of female barristers that she has worked with at the Victorian Bar and whom she claimed were a “privilege” to lead.  She also acknowledged the senior women who mentored her in the early stages of her career, including retired judge Mary Gaudron, the first female Justice of the High Court of Australia.

Crennan concluded her speech with the hopeful prediction that women would play an increasingly important role in Australia’s legal system.

“It has been tremendously interesting to witness these palpable changes; such changes are likely to continue even though the rule of law, a human instrument, is unlikely ever to be perfected, or to command unqualified respect and admiration,” she said.

Other legal luminaries were among the guests at the sold-out event, including judges of the High Court of Australia, Federal Court and the Victorian Supreme Court. Partners and lawyers from firms, government agencies and industry bodies also attended.

Check out our photo gallery below for highlights from the event hosted by Foley’s List.

Photo gallery: Women with a lot to celebrate