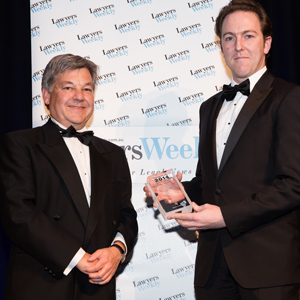 Junior barristers were lauded at the Lawyers Weekly Law Awards, proudly sponsored by Michael Page Legal, for the way they handle complex and diverse briefs.

Junior barristers were lauded at the Lawyers Weekly Law Awards, proudly sponsored by Michael Page Legal, for the way they handle complex and diverse briefs.

In presenting The Junior Barrister Award, proudly sponsored by specialist insolvency firm Sheahan Lock Partners, John Sheahan said that just this month his firm has relied on junior barristers for work ranging from negotiations with the Australian Federal Police on a Proceeds of Crimes Act matter to arguments on behalf of clients with regard to legal professional privilege claims.

“It underscores the importance which my partners place on working with pre-eminent, hardworking and energetic and intelligent young barristers,” said Sheahan in front of over 300 people at Sydney’s Four Seasons Hotel on Friday night (8 August). “It is for this reason that we once again sponsor this award for the best junior barrister in Australia.”

Alexander Flecknoe-Brown from Sydney’s 5 Wentworth Chambers took out this Award, open to barristers with less than a decade’s experience at the Bar.

“I felt honoured, if self-conscious, to have won the award,” said Alexander when talking to Lawyers Weekly after the Awards.

Alexander got the nod from the judges in a highly-competitive category in which Melbourne’s Eugene Wheelahan from Aickin Chambers and Maria Gerace from Sydney’s Maurice Byers Chambers were also selected as finalists.

“It would be fair to describe Alexander as a rising star of the Bar in NSW,” said the judges, who noted Alexander’s work on “significant matters” which included successfully acting for an army major in a High Court appeal regarding his client’s conviction by a court martial.

Alexander, whose practice focuses on commercial and public law disputes, was also singled out for praise for acting on numerous pro bono matters on behalf of refugees and for a number of organisations including NSW Legal Aid and the Animal Welfare League Limited.

In accepting the Award, Alexander noted that a reflection of recent changes in the profession was represented by The Junior Barrister Award being added to the Lawyers Weekly Law Awards program last year.

“Perhaps some parts of the Bar would have different views about the desirability of certain parts of change, with some parts [of the Bar] being changed kicking and screaming into the 21st Century,” said Alexander.

In speaking to Lawyers Weekly, Alexander said that while all parts of the profession are under pressure to change, he still enjoys working life as a barrister.

“The Bar demands, among many other things, rigorous and strategic thought,” he said. “Every litigious situation is different, so to be effective a litigator has to remain intellectually adaptive.

“The Bar’s values of independence, collegiality and discretion foster those qualities, whilst assuring that both the courts and our clients are confident of our reliability.”

The Senior Barrister Award was won by Jane Dixon QC from Dever’s List in Melbourne.

Picture: Alexander Flecknoe-Brown is pictured (right) with the trophy after accepting the Award from John Sheahan