How we nailed a serial killer 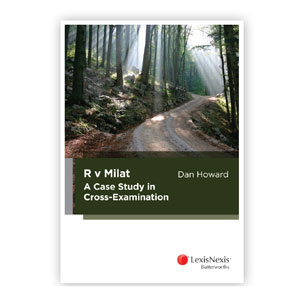 Almost two decades after the historic trial of Ivan Milat, the junior counsel at the time has released a book detailing the tactics used by the prosecution to convict the killer.

Dan Howard SC, who is also the president of the NSW Mental Health Review Tribunal, has published a book called R v Milat: A Case Study in Cross-Examination, which offers a blow-by-blow account of the cross-examination of Milat by crown prosecutor Mark Tedeshci QC, accompanied by a critical analysis of his techniques.

Ivan Milat was sentenced to seven consecutive life sentences without parole for the brutal murder of seven young backpackers in 1996.

The discovery of the stabbed and bullet-ridden bodies in Belanglo State Forest, NSW in 1992-93 prompted the most intensive manhunt in Australian history.

It was only through the combined efforts of the police and the prosecution that the man responsible was finally put behind bars.

An exemplar for future advocates

Lawyers Weekly attended the book launch held at the offices of the Law Society of NSW last week (14 August).

At the launch, Howard said his book preserved the skills, knowledge and quality of advocacy that Tedeshci demonstrated during the trial.

“Having analysed it critically and thoroughly as a much older a wiser man, I’m still in awe of what a first-rate cross-examination it was,” said Howard.

“If you want to see examples, you’ll have to buy the book, but don’t think you can buy the book and be safely cross-examined by Mark. He’s got many more tricks up his sleeve.”

Hoping for a few hints, Lawyers Weekly spoke to Tedeschi. He said the key message that young lawyers should take away from the book was the importance of “focusing and sticking to the point”.

According to Tedeschi, cross-examination is crucial in a criminal trial because it gives jury members the opportunity to form their own view of whether the accused is being “forthright, open, cooperative and honest” or “evasive and lacking in credibility”.

The format of the book is completely unique, said Nicholas Cowdery QC, the Director of Public Prosecutions at the time of the trial.

“This is the only example that any of us can think of where a single cross-examination of a single accused person on trial has been the subject of such close critical examination,” he said.

“It is a large task to digest the detail of this book. It’s not something you pick up for five or ten minutes of relaxation in an idle moment. You really have to apply yourself and, if you do, you will benefit enormously.

“It’s something that will be of very great value to professional advocates and to law students.”

A spokesperson from publisher LexisNexis said there was a great deal of excitement surrounding the title and that the book was so popular it had to be reprinted before it was officially launched.

Why prosecutors can’t be too human

The book launch had a mixed air of eerie reunion and celebration.

It brought together the solicitors, prosecutors and police officers who cracked the case, many of whom had not seen each other in years.

The speakers took the opportunity to reflect on the tragic nature of the case, which continued to rouse so much emotion even 18 years after the trial.

“As much as a prosecutor has to not be emotional, you couldn’t help, as a human being, being very much affected by the tragedy, by the intensity of the trial,” said Howard.

The hardest part was placing victims’ families at a distance. “Throughout the long months of the trial, one wanted to embrace and hug [them],” he said.

The problem, according to Tedeschi, was that the formality, objectivity and professionalism demanded by a court of law promoted a certain “dispassionate approach to cases.”

“A lot of victims find that very frustrating,” he said. But, without this sense of detachment, miscarriages of justice were more likely to occur.

Howard said that he began writing the book in the first year after the trial but “it was too raw, the emotion was still there”. It was only after a very long gestation that the book finally came together.

“There is insufficient acknowledgement given to the accumulation of emotional stress and sadness that can affect, and at times overwhelm [advocates],” he added.

How we nailed a serial killer