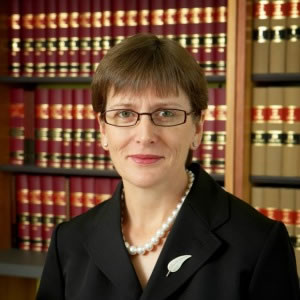 Federal Court judge Michelle Gordon has been named to the High Court, making history by replacing her husband on the bench.

In an Australian first, Justice Gordon will join the court after her husband Justice Ken Hayne reaches the statutory retirement age of 70 on June 5.

Justice Gordon has served on the Federal Court since 2007, before which she was “one of the leaders of the Bar”, according to attorney-general George Brandis.

“The contribution Her Honour has made to the development of the law, particularly in commercial law, is widely recognised by her colleagues on the bench and at the bar,” he said in a statement.

Addressing the relationship between Justice Hayne and Justice Gordon, Senator Brandis ruled out any claims of favouritism.

“It would be outrageous for a person who was otherwise well-qualified for an appointment, as Justice Gordon certainly is, to be disqualified on account of who they were married to,” he told reporters in Canberra.

The appointment brings the number of women currently sitting on the High Court bench to three out of a total of seven judges.

Law Council of Australia president Duncan McConnel congratulated Justice Gordon, lauding her for having the "perfect qualities for the complex type of cases regularly requiring determination in the High Court."

"As a well respected and highly regarded member of the Australian legal profession, Justice Gordon will bring to the position of Justice of the High Court of Australia her measured, astute and humane approach in determining cases."

"She is widely regarded and respected, and we regard this is an outstanding appointment to the highest court in our nation."

Justice Gordon graduated from the University of Western Australia in 1987 and started her career in Perth at Robinson Cox (now Clayton Utz).

In 1988, she moved to Arthur Robinson & Hedderwicks (now Allens) in Melbourne before being called to the Bar in 1992.

Justice Gordon will be sworn in on June 9. Given that she is currently 51, her tenure may last another 19 years before she reaches the mandatory retirement age.

Senator Brandis also farewelled Justice Hayne, who was appointed to the High Court in 1997.

“May I also take the opportunity to thank Justice Hayne for his many years of distinguished judicial service to the Australian people, and wish him a long, happy and active retirement,” Senator Brandis said.