Justin Gleeson SC has spoken out about what Australia can learn from current developments overseas on the international arbitration front.

During an address at the CIArb Australia and Grossi Florentino Business Lunch in Melbourne last week, CIArb fellow and Commonwealth Solicitor General Justin Gleeson SC spoke about his observations on the “dynamic developments currently occurring in international arbitration overseas which have a bearing on the future of arbitration in Australia”.

This was the first time Mr Gleeson spoke on the subject since his retirement as SG.

In his address, Mr Gleeson said that while most of the profession is familiar with international commercial arbitration and its key benefits, there are other forms that are starting to emerge under the spotlight.

“What deserves emphasis is that other forms of international arbitration, particularly investor-state arbitration, are increasingly engaging Australian-based practitioners, whether as arbitrator or counsel,” Mr Gleeson said.

“Investor-state arbitration is a curious creature. It arises out of a combination of reciprocal promises between states in a Business Investment treaty (BIT) or Free Trade Agreement to accord certain defined protections to the investors of the other state, plus an advance agreement to submit disputes with such investors to arbitration.

Mr Gleeson said that there is much debate, especially overseas, about the legitimacy of investor-state arbitration.

“Critics point to its lack of consistency in the development of principle, made worse by the absence of a doctrine of precedent or established appeal mechanisms,” he explained.

“For present purposes, what is important is that there is a very large body of treaties in force with arbitration clauses which invite such claims. It is, or should be, bread and butter for Australian lawyers acting for any client whose investment is endangered by the decision of any government – here or overseas – to examine the possibility of an investor-state claim.

Mr Gleeson noted that on the one hand, “an investor-state arbitration could, by agreement, be governed by the UNCITRAL Rules, which would give it a domestic seat, and enable domestic courts of that seat to exercise limited supervisory powers over the arbitration. Enforcement of an investment award against a recalcitrant state might engage the UNCITRAL Model Law or the New York Convention”.

“On the other hand, suing a state, under any form of international arbitration or litigation, raises its own challenges. States tend to demand very long lead times to comply with procedural directions; to take restrictive views of what documents or witnesses should be produced to the tribunal; to insist on extremes of confidentiality, and so on,” he said.

“Litigation strategy needs to offer tribunals practical options which respect legitimate state sensitivities while also enabling the true legal and factual merit of a claimant’s case to be exposed for decision.

“In short, I see that the investor-state arbitral world, and to a lesser extent the inter-state arbitral world, are areas increasingly likely to engage lawyers based in Australia and to require us to be ever more flexible and outward-looking in our practices, procedures and knowledge of other legal systems. Parochialism here, as ever, is dead.”

Looking ahead, Mr Gleeson said that the future is bright for some individual Australian lawyers keen to access international arbitration work.

However, he noted that what isn’t as easy to see is “how Australia, as a whole, builds itself as an important place within the international arbitration framework, particularly given the tyranny of physical distance”.

“Some things are being done right and should be acknowledged. Our courts, federal and state, are showing leadership in giving effect to the underlying principles of the Model Law and New York Convention in the recognition and enforcement of international and foreign awards. A number of our chief justices deserve particular commendation in that respect,” Mr Gleeson added.

“Our parliaments have brought our statute law up-to-date and in line with best practice overseas.

“But the harder areas are these. If Australia is to compete with the likes of Singapore, Dubai or Abu Dhabi, there needs to be, at a minimum, a substantial further investment in the arbitral institutions Australia has to offer.

“One of the core factors parties rely on in choosing a seat is the strength and depth of the arbitral institutions at the seat. All parties involved in promoting arbitration in Australia should be building a business case for new government investment – federal and state – of this character.”

Secondly, Mr Gleeson said that Australia needs to continue to build the skills and sophistication of local lawyers when it comes to negotiating arbitration clauses.

“The terms of an arbitration clause should, in a commercial contract, be regarded as an important part of the overall pricing of a contract. Each part of a clause needs to be thought about, and if necessary argued over, carefully in the negotiating process,” he said.

“For Australian governments, it is hard to see why, when they let a contract in a position of strength, they should settle for less than an ‘all-Australian’ clause. Even if negotiating from less than full strength, I suspect that a full empirical exercise would show that too often they accept ‘boilerplate’ offered by a foreign contractor that is less than ideal and possibly could have been negotiated away.”

Our companies also need to think hard about these issues, according to Mr Gleeson.

He said while its understood that they must put their commercial interests first, “very often those interests could be advanced by insisting in the negotiation on dispute resolution clauses that name Australia in as many guises as possible – whether as seat, as place of arbitration, as the governing law, as the arbitral institution, as the body of procedural rules, as the nationality of one or more of the arbitrators”.

“Indeed, it would be helpful for the general counsel of our major companies to work in collaboration with each other, and with government, to discuss what can be done better in these areas,” he said.

In addition, Mr Gleeson said that in order to mitigate the tyranny of physical distance, “our arbitral institutions need to have and display world-leading technological facilities so that much of the administrative engagement with the institution and procedural hearings can be done easily without counsel and arbitrators from overseas having to travel here”.

“Finally, in our universities, there needs to be a greater emphasis than at present on the training for every future Australian lawyer as one which equips them to see most legal problems as potentially raising issues that travel beyond our borders,” he said.

“The next generation of Australian lawyers should be fully at home in advising on or running any international dispute – whether arbitral or otherwise. It should be second nature to them to bring a comparative law and cultural mindset to a problem.

“If the skill base of our lawyers is higher, the prospects for Australia as a whole will be enhanced. And our young lawyers should be trained and capable from an early age in sitting as arbitrator, at first in smaller disputes, as is very much the norm overseas.” 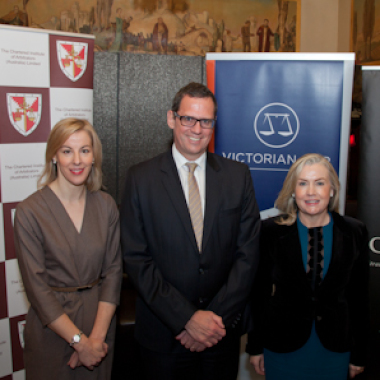