Proposals to increase protections for whistleblowers 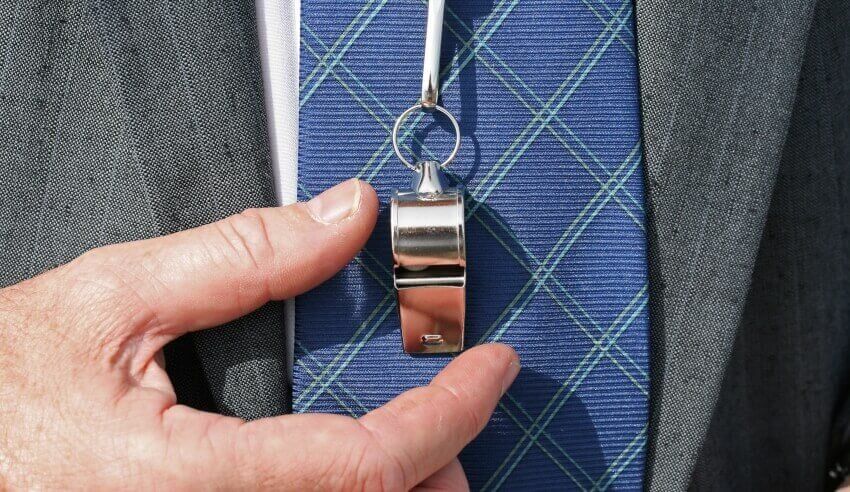 Whistleblower protection is in the news again, writes Geoff Baldwin.

With the possible added stimulus of a couple of recent high-profile private sector cases, a Joint Committee of the Australian Senate has now published a comprehensive and detailed report on whistleblower protection, focused heavily on the private sector, and has made recommendations for change.

The emergence of whistleblowing

Everyone knows what a whistleblower is – someone who publicly discloses improper, corrupt, or possibly even criminal conduct on the part of someone in an organisation. Pretty much by definition, the whistleblower is (or was) also part of the organisation, and is speaking out with inside knowledge, and at very considerable risk to their career.

But not everyone knows how it came about that we now have whistleblower legislation, websites, support organisations and a range of reviews and inquiries, when 50 years ago a “whistleblower” was a football referee.

For most of the 20th century, public service legislation in Australia had secrecy provisions. The fact that someone speaking out was shining a light on serious misbehaviour was no defence. In the early 1970s, police officer Sergeant Philip Arantz, who had publicly disclosed that NSW police crime clear-up rates were being routinely falsified, was branded as insane by the then Premier Robert Askin (who was also the Minister for Police), and subsequently dismissed.

While this was an unusually high-profile case, public servants were often disciplined, and occasionally dismissed, for speaking out about things they believed were wrong.

However, in 1976 Neville Wran became Premier of NSW, taking office with the support of South Coast independent MP and anti-corruption campaigner John Hatton; and so Wran’s government agreed to support Hatton’s agenda. Hatton had championed the case of Eddie Azzopardi, whose efforts to reveal police corruption had been rewarded by, among other things, the police firebombing his garage. Azzopardi was a member of the public and hence not a “whistleblower” as such, but this case gave impetus to Hatton’s cause.

Although Hatton was a tireless campaigner, an anti-corruption commission (ICAC) was not established until the election of the Greiner government in 1988. The first whistleblower legislation was the NSW Protected Disclosures Act 1994. While public service secrecy provisions had by that time been much watered down, it was still entirely possible that a public servant would (whether in accordance with the rules or otherwise) suffer consequences for speaking out.

The Protected Disclosures Act may seem fairly modest in its approach: all it really did was to protect a public servant from reprisals for speaking publicly, provided all internal channels had first been tried and found wanting. This indeed remains the model: a whistleblower disclosing something in the public arena will (other than in extraordinary circumstances) not be protected without having made at least some attempt to bring the problem to notice internally.

While public sector whistleblower laws are now in place Australia-wide, there is no comprehensive scheme applying to the private sector. There are presently provisions of this kind in a small number of specific industries, e.g. banking, insurance and superannuation; a limited range of provisions in the Corporations Act 2001 and, in relation to trade unions, provisions of the Fair Work Registered Organisations Act 2009.

That there is no comprehensive private sector scheme is not surprising, because the original whistleblower laws are part of a broader push to combat the secretive nature of governments. The main thrust here is freedom of information laws, which are rooted in the principle that, in a democracy, the public has an entitlement to know what its governments are doing.

By contrast, it is accepted that private sector organisations have no comparable obligation and are entitled to keep secret of anything they wanted in the course of fostering their commercial interests, as long as they do not break the law. Their mantra is “commercial-in-confidence”.

Fifty years on, the public/private distinctions are less clear and, in particular, there is far less acceptance that private sector organisations should simply be immune from this kind of scrutiny. The recent report (Whistleblower Protections, Parliamentary Joint Committee on Corporations and Financial Services, September 2017) is one manifestation of this.

Indeed, major business and regulatory organisations making submissions to the Joint Committee are fairly much unanimous in their view that a broad and effective scheme of whistleblower protection in the private sector is an essential element of ensuring robust corporate governance.

There have in fact been numerous previous publications on whistleblowing, the most recent of which are a Senate Economics Reference Committee Issues paper in 2015, and the 2016 “Moss Review” of the Commonwealth Public Interest Disclosure Act 2013.

Although, as has been said, public sector whistleblowing protections are of longer standing and generally fairly comprehensive, the Moss Review found that this act applying to the Commonwealth public sector has substantial deficiencies, including that it is largely ineffective in providing whistleblowers with effective protection against reprisals; holding those responsible for reprisals to account; and in exposing and dealing with misconduct.

In the Whistleblower Protections Report, the Joint Committee has taken an important step in recommending that the private sector generally should be covered by whistleblower laws. However, it recognises that because of the differences between the two sectors, there should (at least at this stage) be separate legislation governing each sector. Nonetheless it recommends the establishment of a single authority to oversee the operation of all whistleblower protection.

Essentially, the report argues for consistency across sectors, except where that is judged to be impractical because of current differences.

• continuing use of the “tiered” approach under which, to secure protection, whistleblowers must first make internal disclosure and, where that does not succeed, disclosure to regulatory authorities before “going public”;

• setting and promotion of standards for internal disclosures in private sector organisations;

• annual reporting to Parliament; and

• aligning protections, and sanctions for retaliators, with the provisions of the Fair Work Registered Organisations Act 2009

And there is always the prospect that an organisation will claim some disclosures to be mischievous: false allegations made for wrong or unworthy purposes, or as a “pre-emptive strike” in an attempt by the whistleblower to erect a defence (through the anti-reprisal provisions) against anticipated dismissal or other disciplinary action.

The report generally takes a measured approach which recognises that due to continuing changes in organisations, the impact on the public of wrongdoing and the shifting of private/public sector boundaries, we need evolutionary change if there is to be an effective regime for protecting those who speak out to expose wrongdoing.

Proposals to increase protections for whistleblowers