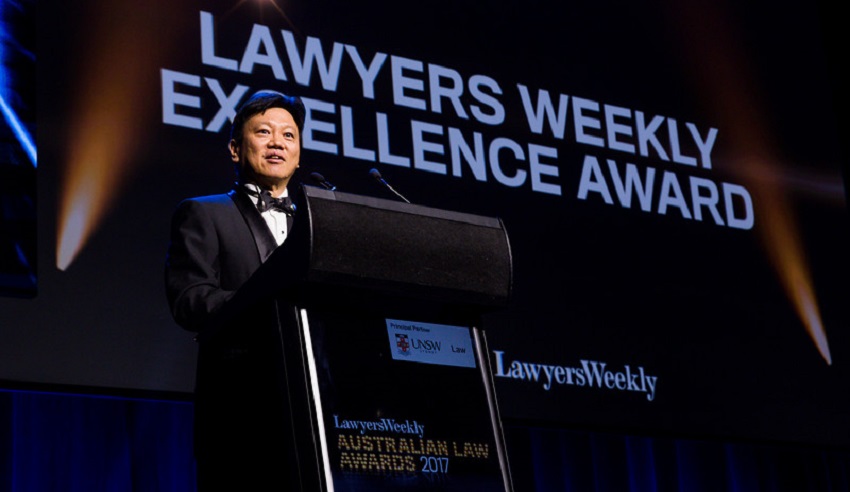 Over 700 members of the legal profession came together to celebrate the achievements of their peers at the 17th annual Lawyers Weekly Australian Law Awards.

Private practice lawyers, corporate counsel, barristers, academics, students and legal support staff all made their marks this year with some outstanding achievements.

In a complex, ever-changing landscape, the winners and finalists showcased their agility, intelligence and commercial acumen to make this year’s awards more competitive than ever before.

Guests flocked to the event centre at The Star in Sydney on 1 September, dressed in their finest and ready to celebrate the leading lights in the legal profession.

Lawyers Weekly congratulates all the winners and finalists on their successes and  their continuing contributions to the law.

Judges of the 2017 Australian Law Awards

Salvos Legal impressed the judges with its unique business model, under which the profits from its commercial arm are used to fund its humanitarian legal services.

Henry Davis York has built its employer brand with a focus on key career transition points, particularly the move from lawyer to senior associate.

The firm’s diversity and inclusion program TogetherHDY, launched in May 2016, aims to increase the understanding of the value of diversity and a commitment to inclusive behaviour.

Innovator of the Year: Allens

Allens’ investment in alternative product and service offerings has paid off, with the judges recognising the success of the firm’s alternative legal services arm a+.

The firm’s expertise and innovative use of technology have delivered huge savings and efficiencies for clients.

Gilbert + Tobin took out Law Firm of the Year once again, demonstrating excellence through its high ratio of leading lawyers, its work on market-shaping transactions and its commitment to technology and innovation.

The firm has worked on some of the most significant transactions of the year, as well as built its capacity in key practice areas and locations.

NewLaw Firm of the Year: LegalVision

LegalVision achieved excellence in NewLaw over FY2016-17 through investing in client service and innovative legal technologies.

The firm has transformed the way clients interact with legal services providers, including offering a fixed-fee pricing model and free initial consultations to improve the transparency and accessibility of legal services.

Arnold Bloch Leibler is highly regarded for its work with Indigenous Australians over several decades.

In 2016, ABL was identified by the National Pro Bono Resource Centre as having made the largest contribution to community service of any law firm of any size in Australia, averaging 71 hours per lawyer.

Established regional Victorian law firm Harwood Andrews once again took out the Regional/Suburban Law Firm of the Year award for its standout expertise and innovative practices.

With four new online tools launched in the last year alone, the firm is rapidly growing its digital service offering for regional clients.

Mr Legg is a pre-eminent legal academic and a thought leader on the law and its intersection with technology.

The judges were impressed by his role as the only academic member of the Law Society of NSW Future Committee, which conducted the inquiry into the Future of Law and Innovation in the Profession (FLIP).

He is also a champion of diversity and multiculturalism. In 2017, Mr Lye received an Order of Australia Medal – the first barrister of Chinese descent to do so – for his services to the law, to business and to the promotion of cultural diversity.

Ms Lyon has been instrumental in growing Hive Legal and in promoting its innovative NewLaw approach.

Having practised as a lawyer in firms of various sizes, as well as holding several business development roles at a top-tier firm for many years, she brings an invaluable mix of experience to Hive Legal.

Ms Maslen-Stannage worked on some of the most significant deals of FY2016-17 in both M&A and equity capital markets.

The innovative deal technology developed on her past deals is now being applied to benefit other clients.

Ms Johnson oversees Uber’s legal and regulatory affairs across two continents, dealing with the unique challenges experienced by one of the world’s fastest-growing and most innovative companies.

Ms Rich is the senior in-house legal counsel and the manager of brand protection for the Gold Coast 2018 Commonwealth Games Corporation.

This role sees her manage a team of four lawyers working on key projects including international broadcasting rights, telecommunications, trademarks and much more.

Law Student of the Year: Milan Gandhi, University of Queensland

Milan is in the final year of his Bachelor of Laws degree and has consistently maintained a first-class honours GPA, while balancing study with a research clerk role at McCullough Robertson.

He is also the founder and director of not-for-profit organisation The Legal Forecast and serves on the advisory board to the College of Law’s Centre for Legal Innovation.

Ms Harding is an essential member of the administrative support team for a number of partners and lawyers in Herbert Smith Freehills’ finance practice.

She has supported the team through a period of significant change, taken an active role in recruiting secretarial staff and implemented a new administrative hub structure.

FY2016-17 marks Mr Macvean’s 10th year as managing partner of Hall & Wilcox. Over the last year he led a number of initiatives for the firm, including the opening of a Brisbane office and several senior hires.

Under Mr Macvean’s leadership, the firm’s overall headcount grew by 19 per cent over the last financial year, while its partnership grew by 9.3 per cent.

Mr Eskerie is a specialist in government law. He has extensive experience acting for government clients in areas including constitutional, administrative, regulatory and commercial law.

Mr Eskerie was promoted to partner in April 2016, just one year after joining Sparke Helmore.

Ms Griffiths is the principal of Slater and Gordon’s Wollongong office and a specialist in motor vehicle accident, public liability and childhood sexual abuse claims.

She is also the president of the Wollongong and District Law Society, a branch of the Law Society of NSW.

Ms Bober is a leading commercial lawyer with a focus on domestic and cross-border M&A. Since joining KWM in 2004, she has become integral to the firm’s commercial practice.

Ms Bober was promoted from senior associate to special counsel at the end of FY2016-17.

Ms Hetherington has developed a unique family law model that focuses on respect and co-operation to minimise conflict, particularly when children are involved.

She has grown Hetherington Family Law significantly since its establishment in 2014, while maintaining a successful part-time working schedule.

Mr Mitchell is a leading special counsel whose practice is focused on M&A and equity capital markets transactions in the energy, infrastructure and oil and gas sectors.

He also demonstrates a strong commitment to volunteering and pro bono work, as well as mentoring junior lawyers.

Mr Littlejohn has led Maurice Blackburn’s Darwin office since it opened in November 2015. He works closely with his small team to build the firm’s presence in the Northern Territory.

Mr Littlejohn and his team exceeded expectations in their first full year of operation, establishing a strong foundation for the Darwin office.

Banking and Finance Team of the Year: Clayton Utz

Their broad experience and cutting-edge legal knowledge help them secure some of Australia’s biggest deals, including acting for the financiers for the Ausgrid acquisition in 2016.

King & Wood Mallesons boasts a market-leading M&A team that worked on some of the most valuable and complex deals of FY2016-17, including advising logistics giant Asciano on its multibillion-dollar sale to a consortium.

A busy year for the M&A practice was key to the firm’s financial performance.

The disputes team worked alongside HSF’s corporate and competition teams to advise Tabcorp on its $11 billion merger with Tatts. This capacity to integrate different practice areas gives the firm a unique full-service offering.

Energy and Resources Team of the Year: Herbert Smith Freehills

Herbert Smith Freehills has been instrumental in guiding clients through the rapid changes affecting the energy and mining sectors.

Through collaborating with other departments, the energy and resources team is able to provide holistic project advice and proactively add value between matters.

Government Team of the Year: Proximity

The MinterEllison team seconded to work on the 2018 Commonwealth Games have guided the company through complex multinational broadcasting negotiations, security contracts and logistics agreements, among many other matters.

With a diverse set of legal backgrounds, the team members draw on their expertise to deliver strong results for GOLDOC.

Insurance Team of the Year: Ashurst

Ashurst’s insurance team worked on some of the most complex, innovative and high-profile insurance matters of FY2016-17.

With depth of experience and a range of unique specialties, the team provides comprehensive advice on construction projects, M&A transactions, environmental matters and many other areas.

Gilbert + Tobin had a successful year of IP litigation and commercial IP projects.

The team’s approach is focused on excellent service, consistent and transparent communication with clients and innovative pricing arrangements.

Gilbert + Tobin is at the forefront of IP in the digital economy, working in areas such as blockchain, social media, cyber security, artificial intelligence and quantum computing.

Clayton Utz’s depth of experience in property law has led to another strong year for the practice in FY2016-17. The team leads the market in areas such as urban renewal, inbound investment, affordable and social housing, hotels and aged care.

The firm’s 15 specialist partners, directors and consultants around the country drive the delivery of holistic property advice to clients.

King & Wood Mallesons’ high-flying M&A team advised on some of the most complex transactions of FY2016-17.

With industry experts and best-in-class practitioners, the team provides commercially astute advice to a range of transactions for high-profile clients.

Harmers is one of the most prominent names in Australian workplace relations law. The firm advised on many notable cases in FY2016-17, including high-profile sexual harassment and discrimination cases.

The firm differentiates itself by acting for clients on all sides of the employment relationship, focusing on achieving fair outcomes for all.

There are no nominations for this category, with the award going to the individual winner with the highest score across the lawyer-specific categories. Mr Lye, who won the Barrister of the Year award, impressed the judges with his creative and innovative approach to litigation, negotiation and mediation, as well as his advocacy for diversity in the legal profession.