Home/
News/
Lawyers get a Lifeline

Lawyers get a Lifeline 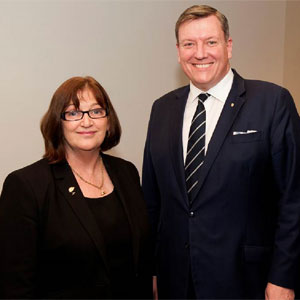 The Law Society of NSW has unveiled a new 24-hour telephone support service for lawyers experiencing emotional and psychological distress.

Brogden described the confidential service as “critically anonymous”. He explained that lawyers, to a greater degree than other professionals, will not seek psychological help out of a fear that it could jeopardise their career.

“We don’t care what you’ve done or who you’ve done it to … this is a service that stands alone and doesn’t judge them [lawyers],” he said.

Brogden also spoke on the factors contributing to the high rate of depression in the law.

Research conducted by Brogden’s wife, Lucy, who is also an organisational psychologist, found that the lower a lawyer’s engagement outside the profession, the higher the proportion of mental illness. Brogden highlighted the “near monastic” lifestyle of barristers and the pressure placed on young lawyers to work long hours as risk factors.

His comments reiterate views expressed at last year’s TJMF Annual Lecture, where he criticised the isolating nature of barristers’ chambers, the institutionalised disregard for the mental health of lawyers and the bravado surrounding the “legendary” long hours.

Lifeline for Lawyers will draw on the resources of Lifeline Australia, with all calls answered by qualified ‘crisis supporters’. However, having a dedicated line allows the Law Society of NSW to track the number of calls and other data associated with the caller. The identity of the caller will not be disclosed to the Society.

Brogden revealed that the most common users of Lifeline are males aged between 40 and 60.

The busiest period for the service is between 8pm and midnight.

Brogden’s take on the statistics is that “life has a lot of demands” for these individuals, and evenings are when they are confronted with life’s pressures, such as credit card bills.

“For that lonely solicitor in Martin Place or out in a country town, late one night where things are very difficult and the pressure is too much, for them to have Lifeline for Lawyers to reach out to … will be a lifesaver,” he said.

The former Leader of the Opposition in NSW and Liberal member for Pittwater resigned from politics in 2005 after a highly-publicised suicide attempt.

Brogden spoke openly about his own battle with depression and said his “one noble cause” in post-political life was to get more people talking about mental illness with the same level of acceptance as physical illness, adding that the workplace is where “the greatest journey is yet to be travelled”.

Lawyers get a Lifeline