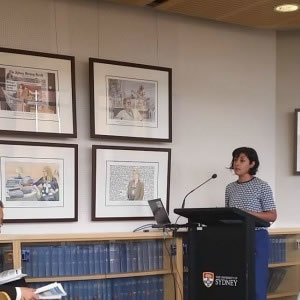 CPCF v Minister for Immigration and Border Protection left key issues of Australia’s compliance with international law unaddressed, but showed that the courts lean towards a narrow interpretation of the government’s powers, said Dr Aruna Sathanapally.

She is also the author of Beyond Disagreement: Open Remedies in Human Rights Adjudication and previously worked as a senior lawyer at the Australian Government Solicitor.

Dr Sathanapally shared her analysis of the High Court decision in an address at the International Law Conference at the University of Sydney on February 6.

“Some, maybe limited, solace can be gathered from the decision,” she said.

“There is very little support from the court for the executive to intercept and return people to a third country without explicit statutory authorisation.

“[But] it remains, I think, the requirement for legislation to state these powers expressly ... that is, through the parliamentary process,” she said.

Dr Sathanapally said the scope of the case may have been limited because it was effectively placed in the High Court’s ‘express lane’.

“[The case] was heard directly by the High Court by way of a mechanism called the ‘special case’, meaning that the parties agreed to …  a reasonably limited set of facts to allow the matter to be heard by the High Court in an expedient way.

“It is fair to say the consideration of this question was hampered by the ‘special case’ vehicle,” she said.

Nonetheless, the case raised a range of interesting international law issues; the first being the lawfulness of the Commonwealth’s current policy of intercepting a vessel outside of Australian waters and then turning that vessel back, she said.

“[This policy] has raised some concern amongst those of us concerned with Australia’s compliance with international law."

The court did not reach a conclusion on this aspect of Australia’s policy but two judges in the minority noted that the powers under the Maritime Powers Act were controversial under article 33 of the UN Convention of the Law of the Sea, said Dr Sathanapally.

One judge specifically said that the powers were “exorbitant” and that they were to be read narrowly, not expansively, under Australian law, she said

Further challenges to Australia's policy in the coming year may put this question to the court more directly, she concluded.

The second interesting feature of the case, from Dr Sathanapally’s perspective, was whether Australia would have breached its obligations under the UN Refugee Convention and Convention Against Torture had it returned asylum seekers to India, a country that may not protect them against persecution or torture.

“The Commonwealth’s position was that those obligations were not relevant and, in any event, the plaintiff had no entitlement to non-refoulement because he did not enter Australian territory,” she said.

However, the United Nations High Commissioner for Refugees made submissions to the High Court to the effect that the obligation of non-refoulement operates extra-territorially where a state exercises jurisdiction over a person, she continued.

The obligation of non-refoulement also forbids indirect return of an asylum seeker to persecution or torture via a secondary party and specifies a duty of inquiry on Australia’s part to discover whether the state that the plaintiff was being taken to offered protection.

“The facts indicated that no such inquiry had been undertaken on board [the vessel] and it is questionable whether it was the subject of negotiations with the Indian government,” she noted.

Despite all this, the question of the compatibility of Australia’s human rights obligations and the Maritime Powers Act was not resolved by the court, she said.

A majority of judges reasoned that the legislation was clear enough that no resort was needed to international law and the minority ruled that it was not necessary to make a decision on this point, she concluded.