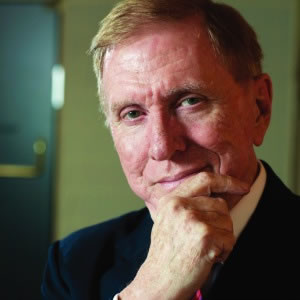 The rainbow flag may be flying across Sydney this week, but some sexuality and gender-diverse lawyers continue to live in the shadows, according to former High Court Justice Michael Kirby.

With Herbert Smith Freehills becoming a sponsor of the Sydney Gay and Lesbian Mardi Gras this year and Norton Rose Fulbright and other major firms initiating Lesbian, Gay, Bisexual, Transgender and Intersex (LGBTI) networks, the legal profession seems to have become a more welcoming place for members of the LGBTI community.

However, there are lawyers that still feel compelled to hide their sexual orientation and gender identity at work for fear of damaging their career prospects.

“I certainly know some lawyers who continue to keep their sexual orientation to themselves,” Mr Kirby told Lawyers Weekly.

Gender identity (transgender) lawyers, gender identification (intersex) lawyers and solicitors in smaller or regional and rural firms may be under more pressure to keep silent, he said.

Among barristers, a desire to be appointed to the judiciary may hold back honesty, he added.

“If those with power over promotion prefer to avoid gays, or dislike them on religious or other grounds, prudence may suggest silence.

“These are the facts of life. If I had been open about my sexuality before the … 1980s, I would certainly never have been appointed to judicial office, whichever political party had been in power,” he said.

Mr Kirby, a highly regarded former High Court Justice with more honours than can be reasonably listed, came out as gay in 1999 after keeping his sexuality a secret from his colleagues for 30 years.

He has been very open about the elaborate techniques he adopted during his career to ensure that no one found out about his long-term partner.

“We have made progress since then. But we would be kidding ourselves if we said that the whole shabby business of prejudice against gays was over,” said Mr Kirby.

People with minority sexual and gender identities continue to be vilified in the community and in the workplace in Australia.

A 2011 report entitled Outing Injustice: Understanding the legal needs of LGBTI communities in NSW showed that out of 591 LGBTI individuals surveyed, 59 per cent had experienced hurtful, humiliating, offensive or disrespectful comments in a public place and 25 per cent had experienced harassment, bullying, humiliation or mistreatment by a colleague or someone at work.

That is not to say that efforts to change attitudes are futile: attempts to foster inclusive and supportive work environments for members of the LGBTI community are both meaningful and important, according to Mr Kirby.

“Symbols matter in life. This week I have attended the raising of the rainbow flag for the first time at UNSW and Sydney University. I could not have imagined such gestures when I first arrived at uni in 1956. They are not empty actions. They delineate what is acceptable in the education space," he said.

Mr Kirby believes it is equally important to send the same clear signals in the workplace and in broader society.

“I applaud HSF’s initiatives. They show leadership, as can be expected from one of Australia’s biggest and most successful legal firms," he said.

“Just imagine what it felt like when I was young, having no role models, conforming to the rule of silence and feeling that my real self was not welcome.

“It will be easier now that strong signals are being given that recognise that skills as a lawyer, advocate or judge have nothing to do with one’s sexual orientation or gender identity,“ he added.

Mr Kirby said the bar and the judiciary could do more to combat bullying, stress, depression and suicide, all of which frequently affect marginalised groups, such as LGBTI lawyers.

“As Marie Jepson pointed out in Lawyers Weekly this week, it is easy to have occasional events proclaiming sensitivity to LGBTI issues. But translating these into day-to-day action is harder, whether on subjects like stress or sexuality. The two are sometimes interconnected,” he noted.

Lawyers Weekly asked Mr Kirby why it was so important that employees feel comfortable being able to identify with the LGBTI community at work and whether it was difficult, in his personal experience, to feel at ease and do his best work when hiding his true identity.

“Only a straight person, with respect, could ask such a question,” he replied. “Just try to imagine the suppression on an important part of yourself. Never talk about girlfriends or boyfriends unless with falsehoods and circumspection.

“Of course it was difficult. One learned the binding rules at about age 11. Centuries of lawyers followed them through, as I did. That game is over now – or should be,” he said.

Mr Kirby argued that lawyers have a special duty to lead social change since religion, reinforced by law, has been responsible for enforcing “irrationality over sexuality” for centuries.

“Lawyers who wield public power (like judges), if they are gay, owe it to the community [and] their colleagues … to be open,” he continued.

“The game of shame will only end when everyone confronts this particular irrational demon.

“We should finish it as quickly as possible. It will be easier to do so in Australia than in most other countries,” he concluded.