Home>
SME Law>
Hangover in the mix for Melbourne lawyers

Hangover in the mix for Melbourne lawyers 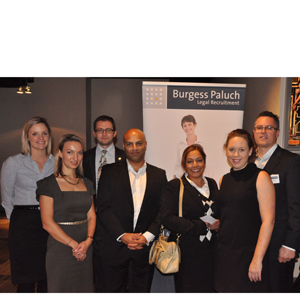 Recruitment companies Burgess Paluch and Kaleidoscope Legal Recruitment decided to show a film that a lot of lawyers could relate to at their recent clients’ movie night – The Hangover Part III.

Recruitment companies Burgess Paluch and Kaleidoscope Legal Recruitment decided to show a film that a lot of lawyers could relate to at their recent clients’ movie night – The Hangover Part III.

“We were thinking of a movie that would help our branding and that was artsy and intellectual and would appeal to lawyers and the legal fraternity, so we came up with The Hangover,” joked Burgess Paluch director Paul Burgess when speaking to Folklaw.

Kidnap plots, trips to Mexico and swinging out of the Caesar’s Palace sign in Las Vegas – sounds like a regular weekend to Folklaw.

The “low-key mixer” at Hoyts Cinemas in Melbourne Central on 29 May was attended by around 300 people – including law firm partners, HR managers, lawyers and legal secretaries.

The recruitment companies run these movies nights a couple of times a year and previous films that have been shown include James Bond and Wall Street.

“This time we picked something that was a bit kind of silly to get people to have a laugh, get out of the office and move away from the demands and stress of practice and just ... enjoy it,” said Burgess.

Hangover in the mix for Melbourne lawyers

Last Updated: 16 November 2020 Published: 05 June 2013
The Women in Law Awards is the benchmark for excellence, recognising the empowering women influencing the Australian legal profession, celebrating the female leaders, role models and future champions of the industry. Register for the waitlist today for the opportunity to attend this remarkable awards ceremony and network with top legal professionals and fellow peers.
Visit womeninlaw.com.au