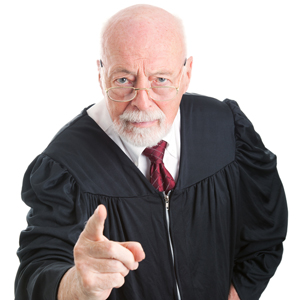 If Folklaw knows anything, it is that if a man comments on a woman’s clothes he is only going to get himself in trouble.

If Folklaw knows anything, it is that if a man comments on a woman’s clothes he is only going to get himself in trouble.

A US judge discovered this recently when he sent out a memo, which was subsequently picked up by international media outlets including The Wall Street Journal, urging female lawyers appearing in his courtroom to wear court-appropriate attire.

Tennessee Circuit Judge Royce Taylor of Rutherford County said in the memo, following a recent Bench/Bar Committee Meeting, “that the women attorneys were not being held to the same standard as the men” when it came to dressing for court, The Tennessean reported.

Taylor further added that he had “advised some women attorneys that a jacket with sleeves below the elbow is appropriate or a professional dress equivalent”.

The Tennessean revealed that there had been some reports of female lawyers in the locality dressing overly casually for court – with one reportedly appearing at a worker's compensation hearing in a golf shirt, and another apparently showing up in a Nashville courtroom in sweatpants.

In that case, Folklaw is inclined to think Taylor has a point.

In fact Taylor, who admitted he’s “not a fashion expert” has received broad support for the direction.

Nashville-based lawyer Karla Miller told The Tennessean she was “slightly offended” by the direction, but added: “The bigger picture is: Some ladies are dressing in a manner that should be bothersome to other lady lawyers who strive to be professional.” While attorney Michelle Blaylock-Howser said if men are held to a standard, women can be too.

And it does appear Taylor is an equal-opportunities stickler for smart dress; he previously found a male attorney in contempt of court for appearing without a blazer and made him donate to charity.

Taylor said his goal is to have all lawyers dress professionally in court, ending his memo by saying: “Your appearance is a reflection upon the entire legal profession.”

Folklaw previously ran a piece detailing how the clothes you wear can affect your career.