All downhill for legal eagles 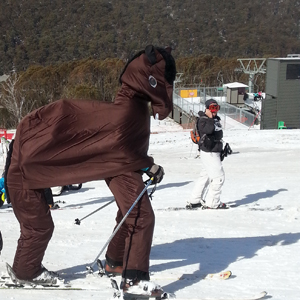 Lawyers and barristers from a number of firms and chambers shoop shoop-ed last weekend away by taking part in the Lawyers’ Ski and Snowboard Race.

The annual event has been taking place in Thredbo for the past 23 years, and ran this year from 2 to 4 August.

“The underlying theme is a mix having a good time, meeting other lawyers and also the rivalry between the firms,” sole practitioner Chris Chow, this year’s president of the event’s voluntary organisers, the Lawyers’ Ski Race Committee, told Lawyers Weekly.

Close to 300 lawyers attended the event this year, with as many as 180 taking part in the races.

The barristers from 6th Floor Selborne Wentworth Chambers had a distinct advantage, as the fastest person on the mountain was also on their team: Zali Steggall, who won bronze in slalom in the Winter Olympics in 1998 and a World Championship gold medal in 1999, is now a barrister with the Sydney chambers.

Her Olympian speed meant she was also the fastest female on the mountain, with Henry Davis York’s Melysha Turnbull second and Ashurst’s aptly-named Georgia Quick third.

The fastest male skier was Josh Knuckey from the team-winning Clayton Utz, with Chris Booth from Moray & Agnew second and Mills Oakley’s Andrew Wallis third; Wallis also won the prize for the fastest lawyer on the mountain over the age of 50.

Snowboarders also had their moment of glory, with the fastest female boarder being Dwana Walsh, who was on Team Chow, and the fastest male boarder Tim Stanton from King & Wood Mallesons.

When asked if the event was competitive, Henry Davis York’s Turnbull said: “Yes and no; I think lawyers are innately competitive, they like to win, but it’s really a fun event.”

Though coordination challenged, Folklaw would attend this event just for the chance to win some of the prizes! At the Polo CPI Presentation Dinner that wrapped up the weekend on the Sunday, two of the prizes were Skimax-sponsored week-long trips to Aspen and Japan; Folklaw could do with a holiday.

In an attempt to be all-inclusive, prizes are even given to the people who come 25th, 50th,75th, 100th and 125th, with prizes also for Best Crash and the Wig and Robe Award presented to whoever completes the course in the best costume.

Herbert Smith Freehills duo Michael Compton (who was a Young Gun finalist at the recent Lawyers Weekly Australian Law Awards) and Murray Edstein took out that prize for going down the mountain dressed as the back and front of a horse (pictured).

Chow won the Best Crash Award, and explained: “I was going for it – I’m one of the guys who does try to win – so it was a pretty big stack, [but] I didn’t hurt myself.

“Someone [else] had a slow fall at the bottom of the hill and dislocated their shoulder ... and that wasn’t even during the race.”

A charity auction was also held at the presentation dinner, with more than $12,000 being raised for Cystic Fibrosis NSW.

See gallery below for a selection of images from the weekend.

All downhill for legal eagles