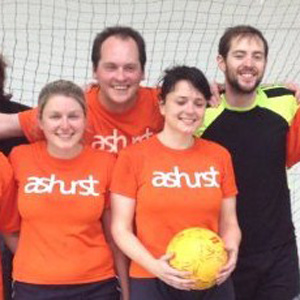 Football fever kicked off in Melbourne a couple of weeks ago when the annual Law Firm Champions Cup took place.

The Cup is normally a Sydney-only event, but this year it expanded to hold a Melbourne round of the competition, with law firms including Ashurst, Arnold Bloch Liebler (ABL), Allens, Moray & Agnew, Herbert Geer and Minter Ellison taking part in the 8 September event.

“It was a great atmosphere,” said Ashurst senior associate Eliza Blandford (pictured right with football), who took part for her firm along with eight other Ashurst lawyers – three women and five men.

Ashurst’s Melbourne office plays a social football game every Tuesday and Blandford said the team decided to enter to “test our skills against the other law firms”.

Unfortunately for Ashurst it didn’t manage to win any of its ‘round robin’ games, but it did make it to the ‘plate’ (or B) semi-final, where it took out ABL – “an all guys team”, Blandford was quick to point out.

A number of finance teams also took part in the Melbourne event and managed to carry the day: LeasePlan beat Ashurst in the ‘plate’ final and Deutsche Bank took home the Cup.

The two best-performing law firms on the day were Minter Ellison and Moray & Agnew, with both teams making the Cup semi-finals.

Over to the Sydneysiders

No doubt the Sydney law firms – including defending champs Holding Redlich – will try and reclaim the law firm supremacy at the Sydney event on 10 November.

Any Sydney lawyers worried they might not be fit enough to represent their firm in the November event need have no fear – by the sound of things most firms’ preparation isn’t too strenuous.

When asked what sort of training the team had put in, Blandford said: “[We had a] bit of a warm up beforehand, grabbed a ball and kicked it around, but we weren’t getting the cones out and doing drills or anything like that; it was just a bit of fun.”

Folklaw believes you Eliza – though we know for most competitive lawyers the fun of anything is most often in the winning.