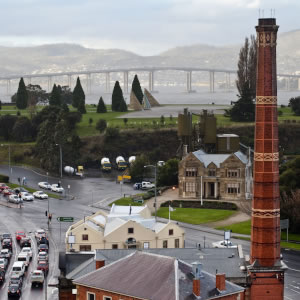 Hobart City Council has chosen to pay a Sydney lawyer $9,000 a day to act on a major property development dispute instead of engaging a Tasmanian lawyer.

The legal community of Tasmania are understandably peeved by this apparent vote of no confidence from their own government.

Law Society of Tasmania president Matthew Verney told ABC news that Tasmanian lawyers are some of the best in the country.

"The reality is that our practitioners ... can mix it with the best from the mainland, I have no doubt about that," Mr Verney said.

He said it was always disappointing when interstate practitioners were favoured, particularly as the cost savings of hiring locally are substantial.

"It could be in the range of some hundreds of dollars per hour I suspect, but of course you've also got the added cost of flying in practitioners," he said.

As of September 2014, Tasmania had 499 lawyers working in 125 firms and 53 barristers, including nine Queen’s and Senior Counsel.

By comparison, NSW had 27,575 solicitors with current practicing certificates as of October last year.

While Folklaw thinks it’s a really bad idea to offend hundreds of lawyers (particularly when you live on a relatively small island), the numbers really speak for themselves.

Council general manager Nick Heath said the council acted on the advice of their legal team in going interstate.

"The advice we got from the Hobart-based legal firm was that this was a complex area of the law and, given that, we were advised by that firm to go interstate, where a lawyer was engaged who could practice in that area," Mr Heath said.

"The Hobart City Council is a very strong supporter of the Hobart legal profession. In fact, I can't think of any case aside from this one where we've used interstate solicitors."

The Sydney lawyer was engaged to lead court action against a developer who failed to make good on his promise to begin work at the Montpelier Retreat site, which he purchased in 2005.