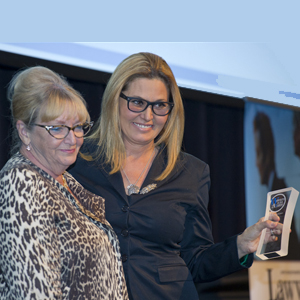 In accepting the Senior Barrister Award, Chrissa Loukas SC said that it is important female lawyers are not queen bees.

Loukas, from Sydney’s Public Defenders Chambers, was a popular winner of one of the showcase Awards at the Lawyers Weekly Women in Law Awards in Melbourne on Friday night (18 October).

In accepting her Award, she paid tribute to the three other silks, Caroline Kenny SC, Dr Kerri Mellifont QC and Elizabeth Wilson QC, who were also vying for the prize.

“The first thing I want to say is this: I want to acknowledge the three brilliant women I was nominated with   Kerry, Elizabeth and Caroline.

“It was an honour to be considered in their ranks.”

Loukas was appointed silk in 2012. In addition to being one of the emerging leaders at the NSW Bar, she also has a résumé that includes a stint as a trial counsel before the International Criminal Tribunal for the former Yugoslavia between 2003 and 2006.

The judge of the Senior Barrister Award, Holding Redlich managing partner Chris Lovell, said that Loukas has made a substantial contribution to the profession.

“I was very impressed by the testimonials given on behalf of Ms Loukas,” said Lovell.  “They all said, without qualification, that she has been an inspirational and generous mentor who has given them a great start in the law.”

Men and women unite
In presenting the Senior Barrister Award, Justice Betty King QC (pictured with Loukas holding her trophy) of the Supreme Court of Victoria said that while there are now nine women on the bench of the Victorian Supreme Court, 17 years after the first female judge was appointed, there is still much progress to be made.

“The first woman ever appointed to the Supreme Court [in Victoria] came in 1996.

“Why did it take so long? Was there not a woman capable until 1996? asked King. “We now have a chief justice that came a few years after that in 1998 [Marilyn Warren QC, who was appointed to the Victorian Supreme Court in 1998 and as that state’s chief justice in 2003].

“Times have improved enormously, but we still have a long way to go.”

In addressing the question of how to retain legal talent in the profession and ensure they have a fair shot at promotion, Loukas said that support for diversity policies needed the support of other women as a starting point, but that men also needed to be heavily involved.

“I take my hat off and applaud every woman here and outside that supports other women,” said Loukas, referencing the famous comment by the former US secretary of state Madeleine Albright that there is a “special place in hell for women that don’t support other women”.

“It is very important we are not queen bees.”

Loukas also thanked the “fabulous feminist men” in attendance, and paid special tribute to her husband, Robert, who attended the Awards, and the couple’s four-year-old son, whom she described as her “work-life balance enforcer”.

“He has already worked out that when my glasses are on and my hair is in a bun I am in work mode,” she said.
“So when I get home or pick him up from pre-school he says ‘glasses down and hair off mummy’.”