Aussie lawyers take up cause for 19 Nauruan protestors

Australian lawyers representing a group of Nauruan citizens charged with offences relating to a pro-democracy protest in 2015 have appealed for donations to help with the escalating costs of their pro bono legal services.

A legal team of five Australians have come to the aid of 19 people in Nauru, blamed for engaging in a violent protest to the Nauruan government on 16 June 2015.

Among those accused of riot by the government are former president of Nauru Sprent Dabwido and former justice minister Mathew Batsiua. They were part of a group that had been demonstrating against the indefinite suspension of Nauru’s parliamentary opposition and the expulsion of the country’s judiciary.

To quash the demonstration, police deployed a domestic law banning the association of three or more people without a permit. Then, when the 19 citizens were charged with various offences, including serious assault, riot and disturbing a legislature, the public defender’s office refused to provide any assistance. No other lawyers remained on the island to defend the Nauru 19.

Two years after the protest outside of parliament, the group have been periodically door-knocking in a bid to collect small donations from local neighbours and continue the legal defence of their case. Proceedings have dragged on and funds to fly a team of pro bono lawyers from Australia to Nauru are sparse.

Sydney defence lawyer Christian Hearn told Lawyers Weekly that no funding had been provided by the Nauruan government to assist his clients and that they were now destitute.

“It has become much more drawn out than originally contemplated and our guys just don’t have any money,” he said.

“At this stage the government has contributed nothing and it’s fallen on us and the defendants to fund it.”

The case was originally prosecuted by the Nauru DPP but the government made a move earlier this year to engage Ashurst Australia. The global firm’s Brisbane office has been paid to take over prosecution of the matter, with a team led by Queensland barrister Peter Davis QC prosecuting the case.

Should the matter continue to trial, it will be heard in the Nauru Supreme Court before a single judge.

High-profile advocate Bret Walker SC has also offered his pro bono services, with a leave application in the HCA tentatively listed for a date in late October.

The High Court application concerns the severity in sentences handed down to three of the Nauru 19, whose three- to six-month custodial penalties had been significantly increased by the Nauru Supreme Court on appeal, in some cases by over 700 per cent.

Mr Hearn said that the path ahead would be long in terms of both preparation and conduct of the trial.

The five-person legal team representing the group also face the tyranny of distance and a weak internet connection for conferencing with the large group of clients, meaning that travel to the island to prepare the case has become essential.

A return trip from Sydney to Nauru costs in excess of $2,000 per person.

“Generally speaking, what happens is the clients will pay for our flights between Nauru and Brisbane and we just absorb everything else – the cost between Sydney and Brisbane, accommodation in Brisbane to make the 6am international departure, stationary and so on,” Mr Hearn said.

“They provide us accommodation in their houses, which is a huge sacrifice on their part – they move out their entire family so that we’ve got somewhere to stay and somewhere to work,” he said.

On Friday a fundraising event will be held at Sir Owen Dixon Chambers for the Nauru 19. Julian Burnside QC and Sprent Dabwido will be guest speakers on the night.

The defence lawyers for the Nauru 19 invite those who would like to support their pro bono work and fight for justice in Nauru to make a donation. 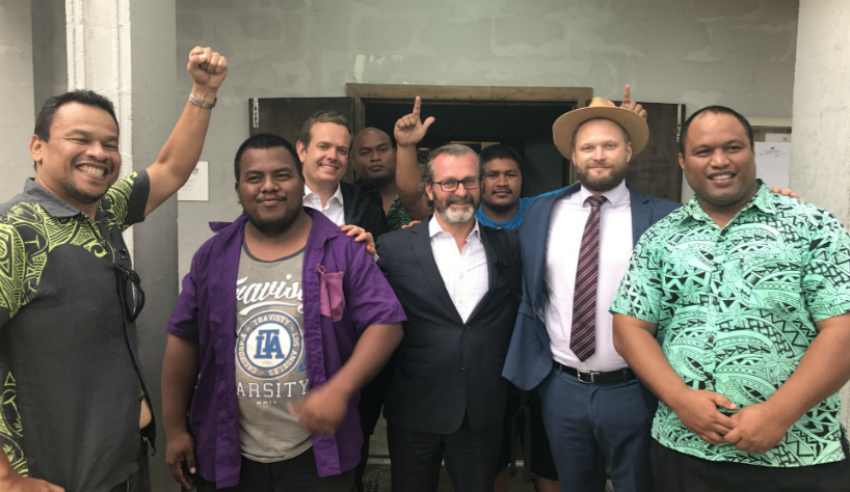 Outside the Supreme Court of Nauru following a HCA grant of bail after the Supreme court upheld the republic’s leniency appeal and imposed much greater sentences on Job Cecil, John Jeremiah and Josh Kepae.

Aussie lawyers take up cause for 19 Nauruan protestors