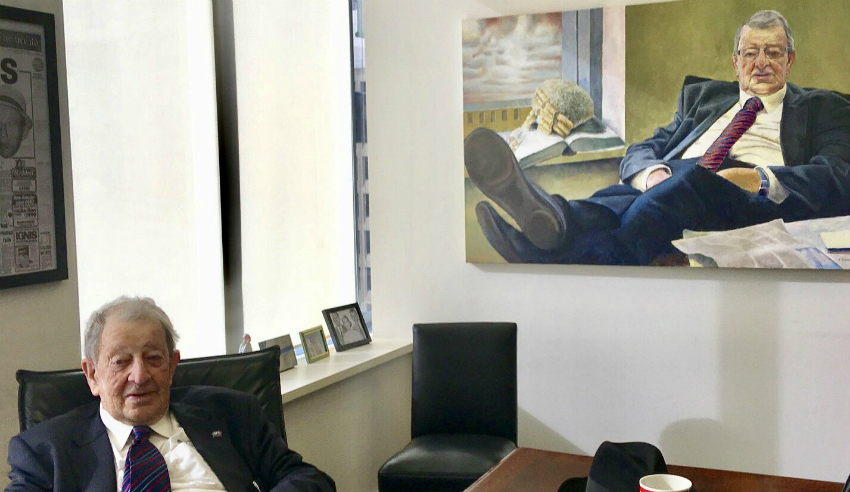 The late Brian Bourke AC, Victoria’s longest practising barrister, who in 1967 defended the last person to be hanged in Australia, has been remembered as an inspiration and “real fighter for the underdog”.

Speaking at the launch of the chambers in his laconic and direct manner, the criminal barrister opened by saying that when he woke up that morning he was Brian Bourke.

“Now I'm Brian Bourke with chambers named after me. It is a great honour you extend to me,” he said.

Mr Bourke died peacefully at home following a stroke on Good Friday. He was aged 88.

“We know, in his short retirement, after an illustrious career at our criminal bar, he was thrilled to be known as ‘… Brian Bourke with chambers named after (him)’,” a memorial post on the chambers’ Facebook page said.

Mr Bourke was the first Amnesty International member from Australia and the group’s first local meeting was held in his barrister’s chambers. He read under James Gorman, who later was appointed QC and made a Victorian County Court judge.

Mr Bourke was a practising barrister for more than 57 years and in 1998 was recognised as a Legend of the Bar in the first group of Victorian barristers to be named so.

An outpouring of tributes for the late barrister have flowed on social media following the news of his passing.

Rob Hull, the director of RMIT’s Centre for Innovative Justice, took to Twitter to express his condolences: “Vale Brian Bourke. A wonderful barrister, a real fighter for the underdog, and a true gentleman. Will be sadly missed.”

Fiona McLeod SC, Victorian barrister and immediate past president of the Law Council of Australia, tweeted: “Farewell Bourkey. Never too busy to guide a youngster like me #auslaw #ausbar @AustBarAssoc”.

Melbourne-based criminal lawyer Felix Ralph recalled the last time he saw Mr Bourke at the Melbourne Magistrates’ Court. He said that the barrister was telling a group of school girls about the plea he had made and was encouraging them to pursue careers in law.

Barrister Michael Cahill said that Mr Bourke would be remembered as an outstanding criminal advocate who has inspired lawyers committed to the administration of criminal justice in Victoria.

A Facebook message posted by Brain Bourke Chambers said the “firm republican” reluctantly accepted an honour by being made a Member of the Order of Australia (AM) General Division for the Queen’s Birthday in 2017.

“He was an outstanding criminal advocate who was the first-choice barrister for many famous and infamous crime figures. He represented Ronald Ryan, the last man hanged in Victoria, for the murder of a prison guard, and counted underworld boss Mick Gatto as a friend,” the message said.

Remembered as a modest man who shunned accolades, Mr Bourke refused to take silk over more than 57 years in practise because he said that he did not believe in the title. During his time at the bar he mentored 11 Readers.

“The Queen has quite enough Counsel; and I’m Irish,” Mr Bourke was quoted as saying in his Victorian Bar obituary.

Born in Wangaratta, Victoria on 13 June, 1929, Mr Bourke was the son of a publican. He left school after attending a number of different country state schools and finishing grade 11, soon after moving into full-time employment with the state Lands Department.

Mr Bourke completed year 12 within only five months at Taylor’s College and was admitted as a solicitor in Victoria in 1953. He completed articles for five years with Brendan McGuinness at Brew & McGuiness, and remained with the business for an extra five years after his admission, working as a solicitor.

Mr Bourke was the former club chairman of the Sydney Swans from 1967-72. Players of the club wore black armbands in memory of Mr Bourke.

“Brian Bourke is credited with recruiting the legendary Norm Smith to coach the Swans in 1969 and is a Sydney Swans Life Member,” the club said in a statement last Friday.

“The Sydney Swans offer condolences to Brian Bourke’s family and friends, including his wife Jen, his four daughters and six grandchildren.”

The late barrister’s affiliation with football was just as prolific as his reputation in law, having served on the AFL Tribunal from 1976-82 and the AFL Appeals Board in the 2000s.