Pro bono target should be mandatory for LSMUL winners

Whether or not your firm embraces its obligation to give back, large business and government entities offer law firms a clear incentive for helping close the justice gap: their business. At least, in theory they do, writes Jacqueline (Jaci) Burns.

Having analysed the results, I’m disappointed to realise how little weight pro bono work appears to have been given by the Commonwealth.

Based on figures published by the Attorney-General, 22 law firms achieved the aspirational target (of 35 hours per lawyer per year) in 2017-18.

Of those 22 firms, 18 enjoyed varying degrees of success in the recent Australian government tender. 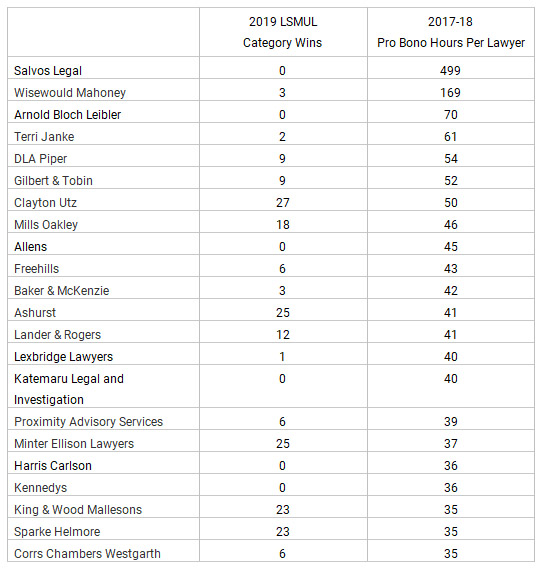 Six firms – all incumbents – missed out entirely in the recent tender, despite their significant pro bono contribution. This includes Arnold Bloch Leibler which reported 70 pro bono hours for each of its lawyers in 2017-18, and Allens (45 hours).

Meanwhile, 46 of the Australian government’s new panel law firms are yet to achieve the aspirational target. This includes HWL Ebsworth which has been appointed to every one of the government’s 27 categories of law.

The other big LSMUL winners which are failing on pro bono include Maddocks (25 categories), Norton Rose Fulbright (21), Holding Redlich (19), Gadens (17) and Moray & Agnew (17). On the 2017-18 figures, none of these firms are satisfying its pro bono obligation.

Conservatively, there’s $800 million in legal fees up for grabs over the next five years. Let’s assume the Australian Government Solicitor nabs half of that. That leaves $400 million divvied up between 62 firms.

Back in 2016, I predicted the day would come when:

As a soothsayer, I’m clearly rubbish, but three years on I feel as strongly – more so – about the issue.

Good corporate citizenship should not be optional. For law firms, pro bono work is a central pillar of any corporate responsibility program.

To that end, for the Australian government’s panel law firms, achievement of the aspirational target should be non-negotiable.

Pro bono target should be mandatory for LSMUL winners