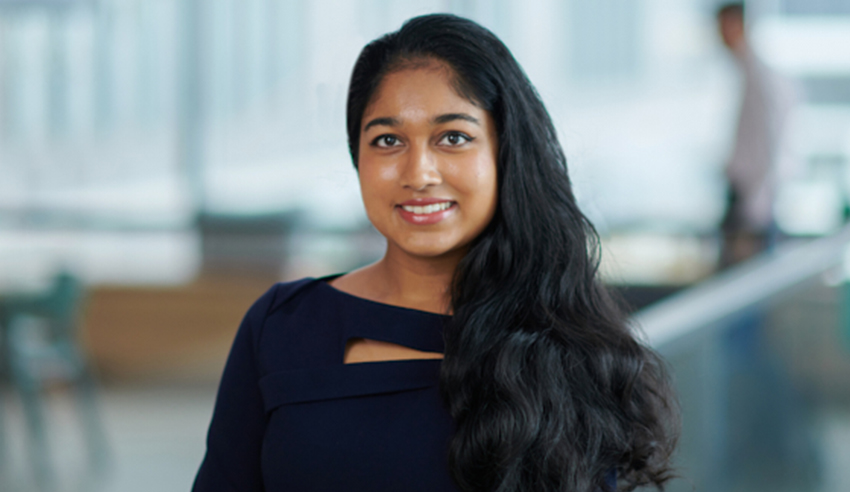 Learning more about the Asia-Pacific region will be important for the next generation of lawyers as it becomes a regional focus point for businesses in the future.

She said emerging legal professionals could better educate themselves about the Asia-Pacific region, noting that literacy about the region is essential – not only as the geopolitical and sociocultural landscape evolves, but also so that lawyers can adopt a broader, more holistic understanding and appreciation for legal practice and how best to serve clients in the future.

As a law student, Ms Nadaradjane had involved herself in the New Colombo Plan exchange program, where she both studied law in international relations and had the opportunity to intern at Norton Rose Fulbright over in Jakarta.

“I saw it as a really great way to become a more global citizen and to develop Asia-literate skills, which was so important, I think, living in this region, working internationally, as well as in the workplace here. I don’t think enough Australians sometimes have a strong cross-cultural understanding of what it is to work in Asia or with people of Asian background. It’s very different to an Australian way of working,” she said.

“And I also wanted to just broaden my horizons, learn, and understand how can I, as a young Australian, build that relationship myself and take those skills and leverage those opportunities for the future generation.

“Not many students or young people have as much experience living or understanding the cultures of the Indo-Pacific, so this is a really great opportunity for students to really broaden their horizons and gain those Asia literacy skills that are so important.”

Ms Nadaradjane said she decided to get more involved in the New Colombo Plan, both through the National Summit and also doing the program overseas because she “really wanted an Asia-centric lens on my own industry in law”.

“I wanted a more global lens, and I wanted to also be part of advancing the academic, social, and cultural ties between Australia and our region. And I thought this was a great way to do it. And I also think that living in this Asian century, I also wanted to develop the networks with people overseas and understand how they work,” she noted.

“When I was back at university, I really wanted that global focus or to understand what is happening in the region, and I wanted to form these genuine, meaningful connections with people I worked with in Indonesia.

“I didn’t really actually know if I wanted to go down corporate law or even go into law, but it was that experience which was really pivotal in my trajectory towards going into law was because I developed such genuine relationships with the colleagues I worked with, and I found it so fascinating and stimulating to be able to work on areas of law with an international flavour, but also understanding how a different country operates in transactions and contracts, which was incredibly interesting.”

Ms Nadaradjane noted part of the reason why the Department of Foreign Affairs and Trade now really pushes and invests now for younger people to go to Asia is because traditionally and historically, most Australian students went over to the United Kingdom or the America where they studied and they brought experiences back to Australia.

“But now that we’re living in what they deem as the Asian century, the Australian government is realising that some of our closest neighbours such as Indonesia, which is where I studied, will be one of the biggest economies in the world, perhaps by 2050,” she added.

“Right now, it’s a fast-progressing nation. It’s a massive archipelago. It’s an emerging economy, and there is so much investment that needs to go into that region because in the future, that might be an area where Australia has a very strong and primary trade relationship with that particular country.

“I think that’s particularly one of the reasons why it’s so important to get more young people in the Asia region and why perhaps there hasn’t been that in the past, just because of, I guess, a pivot towards realising the importance of that relationship there.”

The government has also realised that education has been a great way to promote public diplomacy and greater soft power relationships, according to Ms Nadaradjane.

“Because you’re getting young people soaking in the culture, building these important connections and relationships in business, in education, and research,” she noted.

“Whatever they decide to do over in Asia, they can bring back those skill sets back to Australia, back to their workplaces, and share that knowledge with their colleagues in order to find different solutions or ways of thinking about how to work in the industry overseas as well.

“So I think it’s so important that there’s investment now and that Australia has realised the importance of that.”

Given where the sociopolitical climate is at, and how Australia’s relationships with partners in the Asia-Pacific region are shaping up in the years to come, it was important for emerging lawyers to be “APAC-literate”, according to Ms Nadaradjane.

It would not only enable emerging legal professionals to adapt to the evolving geopolitical and sociocultural business landscape but also allow lawyers to find a more holistic understanding and appreciation for legal practice and how best to serve clients in the future.

“I think it’s so important to be Asia-literate. And I know sometimes people think of it traditionally as being in a business that directly works in the ASEAN region or that they work in diplomacy or foreign policy specifically,” she explained.

“But even in the legal industry, we are seeing greater access to legal services on a fly-in, fly-out basis due to trade agreements. And that’s an essential element of the business model of law firms operating internationally nowadays, regardless of whether they have the on-the-ground presence overseas.

The transcript of this podcast episode was slightly edited for publishing purposes. To listen to the full conversation with Anjali Nadaradjane, click below: