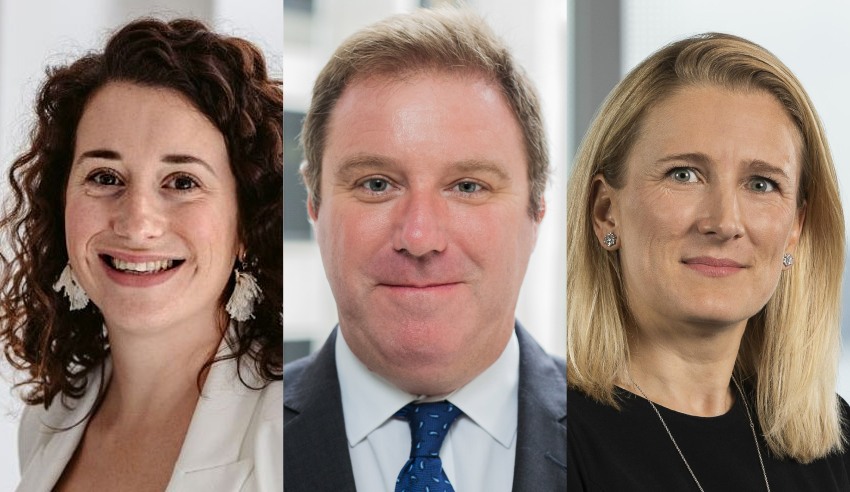 All legal professionals should be checking their employment contracts as a matter of urgency, given that last week’s changes to superannuation mean that some lawyers will see reductions in their take-home pay.

From a macro policy perspective, Swaab partner Michael Byrnes (pictured, centre) said, the change to the superannuation guarantee percentage from 9.5 per cent to 10 per cent, with an incremental increase to 12 per cent to occur over time, “makes a lot sense”.

“The demographic trends in society, with people enjoying increased longevity and, as a result, longer retirements, make it imperative that provision be made for funding those retirements. Increases in the compulsory superannuation rate serve that important objective,” he advised.

For many employees in the legal profession, however – particularly younger ones – there are potential, inherent downsides to this legislative update.

Consequences from the changes for many employees

The worry for some lawyers, Resolution123 founder Carly Stebbing (pictured, left) said, is that employers will reduce their take-home pay in order to cover the increase to superannuation.

Squire Patton Boggs director of employment law Erin Kidd (pictured, right) explained that employees will generally fall into one of three categories with respect to the super changes.

“Employees may want to check their contracts so they know how they will be affected (if at all),” she suggested.

For emerging practitioners, the super changes may be troublesome as they may prefer the money being remitted into their superannuation fund be paid to them directly, so they can live more comfortably now.

“Given the high cost of living, particularly in cities such as Sydney and Melbourne, that is an entirely understandable sentiment. One frequently expressed concern is that the pay compulsorily remitted to superannuation could be better directed as savings to help secure a foothold in the housing market, which is becoming increasingly elusive for young legal professionals, even though they are often paid relatively well compared to most others in the community,” he noted.

Such worries may become even more problematic, he continued, as the superannuation guarantee percentage incrementally increases to 12 per cent between now and 1 July 2025.

“If such employees are already stretched meeting their immediate financial commitments, then that will become even harder as take-home pay continues to decrease and expenses increase through inflation,” he said.

“Those employees will need solid increases in remuneration to maintain the status quo. In the present uncertain financial environment due to the pandemic, such increases cannot always be assured.”

In the continuing age of coronavirus, in which there remain fluctuations in the economy and subsequent fiscal security for Australians across the board, these changes may add to an increasing burden for some lawyers.

There is “good evidence”, Ms Stebbing noted, that wages and salaries have stagnated or decreased against the cost of living over the past 10 or so years.

“Many employees were asked to take pay cuts or pay freezes last year. While most cuts have been reinstated employees have not made back the loss. If an employer funds the increase by decreasing take home pay it will mean a 0.5 per cent decrease to wages or salaries,” she said.

While the increase to the superannuation guarantee rate is “laudable and important from a broader long-term economic perspective, it nevertheless leaves some employees who might suffer a reduction in take home pay feeling like they are going backwards, exacerbating the stress they are already experiencing through the pandemic”, Mr Byrnes added.

“The fact they might have a larger nest egg in 30 or 40 years’ time is little consolation if they are struggling to get by day to day,” he said.

Thankfully, Ms Kidd pointed out, “for the vast majority of employees” those reductions have now ceased, and some firms have gone the extra step to repay the reductions either in whole, or in part.

“Obviously, employees will want to know if they are directly impacted or not and factor any reduction in their take home pay into their budgeting. That being said, the market is buoyant, salaries are competitive, and many more firms are offering flexibility to work from home a couple of days a week,” she said.

“As a result, hopefully, even if an employee is seeing a 0.5 per cent reduction in their take home pay, there could be other benefits that may be a sufficient trade off.”

If an employee falls within the category of employees who can have their take-home pay reduced, Ms Kidd outlined, “all they can do” is have a conversation with their employer in a way akin to any other discussion about salary.

“Employees should be aware that the superannuation rate is set to increase 0.5 per cent on 1 July each year until 2025. This is another reason employees should check their contracts and determine how they are impacted,” she said.

“If they are going to have their base salary reduced by 0.5 per cent for the next four years, then they will no doubt want to factor this in to salary review discussions and plan accordingly. The upside of it all of course is increasing your superannuation fund balance, which was the reason behind the increases in the first place.”

In the short-term, Ms Stebbing said in support, lawyers whose contracts or industrial instruments allow for the change should dispute the change on the basis it is unfair in the current economic climate.

“Any data you can reference in support and relevant to your employer will assist, e.g. EOFY results, your personal results and the results of your team. Explain how you add value and what effect the decrease in your take home pay will have on you and your family. While you are at it, make your case for a pay increase,” she advised.

Following this, Ms Stebbing said, “if your employer doesn’t relent, organise! Join your union or just chat with your colleagues and consider bargaining collectively for better terms and conditions of employment. Anyone can do this, you don’t need to be a member of a union and there are general protections for employees exercising their workplace rights. Sign union petitions against employer’s reducing take home pay”.

For employees who are starting a new job, try and negotiate the pay to be exclusive of compulsory superannuation, so that the planned increases in the superannuation guarantee percentage through to 2025 won’t leave you out of pocket, Mr Byrnes said.

“If the amount is expressed to be inclusive of superannuation (many companies have a standardised approach from which they won’t depart for individuals), then in making a decision as to whether to accept the position factor in the increases to the Superannuation Guarantee percentage,” he said.

Lawyers are often so busy looking after their clients that they can neglect their own interests, including financial interests, he continued.

“With increasingly larger amounts being compulsorily remitted to superannuation, that should be a catalyst for employees to more critically scrutinise the performance of the fund they are in, and whether there are better options. While there is no control over the percentage that is remitted into superannuation, employees do have agency over the fund into which the superannuation amounts are directed,” he said.

The message being sent by employers

Just because an employer has a legal right to do something, Mr Byrnes warned, doesn’t mean it necessarily should.

“Even though employers might have contracts that express pay to be inclusive of superannuation, and can theoretically redirect the increase in the Superannuation Guarantee percentage from the take home pay of an employee, the employer needs to reflect upon the message that sends to employees and the potential damage to the employer brand,” he said.

“There is plenty of negative employee sentiment directed towards employers who adopt that approach.”

Ms Kidd agreed: “If employees within a firm are all being treated in the same way, then it’s not so much about unfair disadvantage and more about the value that the firm and an employee place on the changes and how the firm has approached it.”

The last 18 months have been tough for many employers and employees, she continued, while others have prospered.

As such, she said: “I would like to believe the organisations that can afford to fund the additional superannuation contributions will do so, but some employees may need to accept that a small decrease in their take home pay is required while their employer continues to weather the COVID-19 storm.”

“Meanwhile, if firms do decide to utilise any contractual ability to fund the increase from employees’ base salary, then those firms have to accept that this could be a factor which might influence employees to stay or look for new role,” she reflected.

One important element of the communication strategy, Mr Byrnes went on, is to emphasise that contributions to superannuation aren’t, contrary to the perception of many employees, “lost money”, that the contributions are payments made by the employer for the benefit of the employee, even though that benefit might not be realised for many years to come, he said.

“What might simply be a quirk in the way remuneration was structured at the time the employee commenced, or the way in which a particular employee’s contract was drafted upon commencement, could lead to a serious (and morale damaging) anomaly where comparable employees working side-by-side are treated differently without there being a sound rationale for the differential.”

Irrespective of the terms of employment contracts or strict legal obligations, Mr Byrnes mused, for many employees, the approach adopted by their employer to the increase in superannuation guarantee rate is “something of a litmus test as to whether they are truly valued”.

“If the employer does not provide a commensurate increase to the salary of its employees, it should reflect upon ways to communicate the rationale for the decision, including that the money is not ‘lost’, but being redirected to superannuation as part of the government policy initiative,” he said.

“The increases in the rate occurred on 1 July, which often coincide with pay reviews, providing an opportunity to manage the issue as part of that process. Employers who have pay increases at different times might want to consider adopting 1 July as a review date, as this issue will (absent a policy change) continue to 1 July 2025 (when the rate will increase to 12 per cent).”

For employers, Ms Stebbing recommended they simply “don’t be a d**k”.

“The legislature intended superannuation to be a cost funded by employers not employees. Just because the contract or industrial instrument permits it, doesn’t make it fair or reasonable,” she said.

“Consider the effect the 0.5 per cent decrease will have on already stretched finances, especially in locations where the cost of housing has increased by 13.5 per cent or more over the past 12 months.”